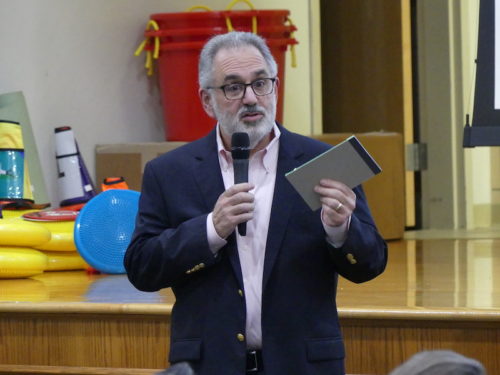 Planning board chairman Dan Mancuso at a meeting in October. The board ‘endorsed’ the primary school garden, below. (Photos by John T. Ward and Red Bank schools. Click to enlarge.)

At its opening session of 2023, and the first ever available via Zoom, the planning board also ‘endorsed’ the learning garden at the borough’s primary school, and learned that, so far, there are no other applications pending. 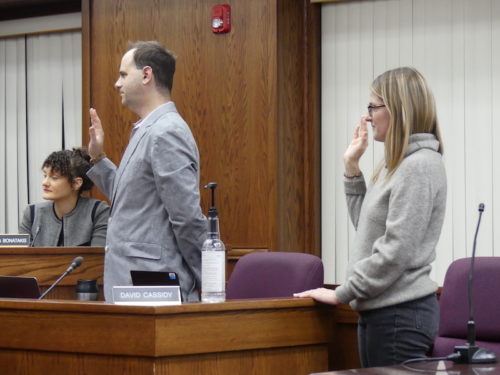 Board members David Cassidy and Alix Schroder at their swearing-in Monday. (Photo by John T. Ward. Click to enlarge.)

Dan Mancuso, who was re-elected as board chairman, said the rollout of a 168-page draft of the Master Plan will begin Tuesday, when it will be sent to board members and the borough council.

On Friday, the document will be posted on the borough website and available for public inspection at borough hall, community planning director Shawna Ebanks told redbankgreen.

“It’s very interesting reading,” said Mancuso, who sits on a board steering committee overseeing the rewrite. “The document is overwhelmingly statistics and data, which is some of the most interesting stuff,” but it also contains recommendations, he said.

The plan, written by New York City-based BFJ Planning, under a $150,000 contract, is subject to further input by board members, elected officials and residents, with at least two public hearings to be held before it goes to a board adoption vote, said Mancuso.

“We promised the public from day one that not only would they have plenty of opportunity for input, but I want them to have several weeks with the draft,” to study it and offer comments and critiques, he said.

Before then, the board is expected to discuss the document at its January 23 meeting.

Any zoning or other changes to emerge from the plan would have to be enacted by the borough council.

Meantime, here’s the interim report prepared by BFJ in September. Additional resources can be found on the planning and zoning page of the borough website.

• In other business, Councilman Michael Ballard, Fire Marshal Tommy Welsh and resident David Cassidy were sworn in as members, along with mayor’s alternate Alix Schroder.

• The board also “endorsed” the raised-bed garden and learning area at Red Bank Primary School. The school district was required under New Jersey Department of Education’s finance division regulations to obtain an informal board review and approval of the project, which was planted last year.

Board members Fred Stone, who also sits on the board of education, and Barbara Boas, who’s on the Red Bank Borough Education Foundation board, recused themselves from the discussion.

• The meeting was the board’s first that could be viewed live and remotely, via Zoom. Future meetings will also be “hybrid,” with live and remote access – though comments and questions will only be allowed by those present in person, Mancuso said.

Under New Jersey law, land-use hearings are quasi-judicial matters, and require that anyone who speaks from the floor be sworn in, he noted.

“To do that online is a whole, ‘nother thing,” Mancuso said. And while the state allowed hybrid sessions starting during the COVID-19 pandemic, “technically, there has not been a law allowing. meetings to be held online,” he said.

At the moment, however, the board has no applications pending on its docket, Ebanks said.

Zoning board meetings will also be hybrid, she said.