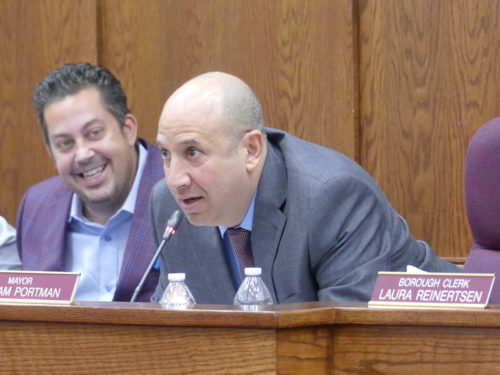 Mayor Billy Portman opens the reorganization meeting as Attorney Dan Antonelli looks on, above; new fire chiefs were sworn in, below.  (Photo by John T. Ward. Click to enlarge.) 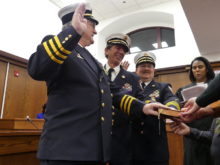 Red Bank entered into a period of transition Wednesday night, as a new mayor took the helm of a government that’s slated to vanish in seven months. 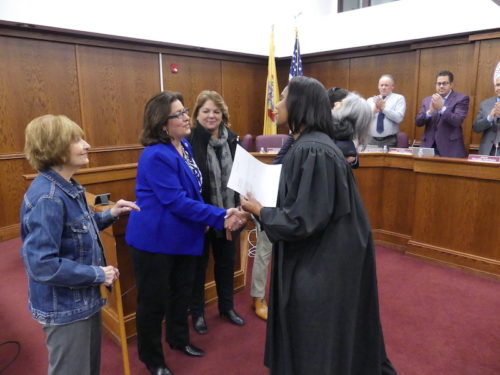 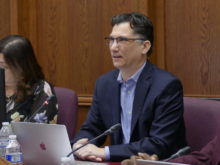 “We’ve had the same form of government for almost 120 years. We’ve been operating under the same Master Plan since 1996,” Portman said in brief remarks to a packed council chamber. “And now, I find myself overseeing the largest set of changes in the history of Red Bank.

“I am excited to be at the helm” as the town adopts new Master Plan, implements nonpartisan elections and changes its form of government, he said.

His “governing philosophy,” Portman said, will be “one simple question: Is this decision good for Red Bank?”

Following overwhelming voter approval of a November referendum, Red Bank is scheduled to switch to a “council-manager” form of government July 1, replacing the “mayor-council” or “borough” model in place since 1908.

But first, in May, an election is to be held to select a mayor and fill all six council seats. Portman has previously said he plans to run to keep his new position.

A Democrat with no experience as a candidate, Portman jumped into the 2022 mayoral race at the last minute, trouncing his organization-backed opponent, Councilman Michael Ballard, in the party primary in June.

Portman ran unopposed in the November general election, in which he supported the referendum.

As mayor, he succeeded succeeds Pasquale Menna, who held the post for 16 years, after having previously served 18 years as a council member. Menna, whose elderly father was hospitalized recently, was not in attendance.

Jackson will serve as liaison to the public library, parks and rec committee and rent leveling board; Mirandi will do the same for the Navesink River Municipalities Commission and shade tree committee.

Here are some other highlights from the session:

Council president: For the second time in his two terms, Michael Ballard was tapped for this ceremonial role. Kate Triggiano cast the lone ‘no’ vote.

Planning board: Portman will take Menna’s seat, with Alix Schroder as his designee.

Ballard returns to the board as council liaison.

Reappointed following the expiration of terms were Dan Mancuso, who has held the chairman’s spot for several years; David Cassidy, an alternate; and Fire Marshal Tommy Welsh.

Historic Preservation Commission: Roseann DelPra and Paul Sullivan were reappointed, to be joined by Paul Cagno and Liam Collins, though there was some uncertainty about whether DelPra’s term had ended. If it has, the appointment will be voided, said Attorney Dan Antonelli.

Fire department: As previously reported by redbankgreen, Wayne Hartman was sworn in as 2023 chief, his third time heading the all-volunteer squad following stints in 1995 and 2019. Former chiefs Bobby Holiday and Frank Woods, both borough employees, will serve as first and second deputies, respectively.