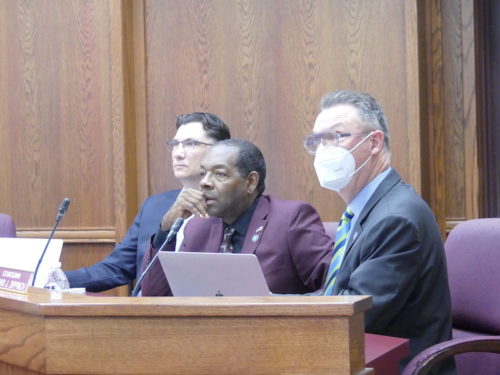 Red Bank’s council majority adopted a new set of bylaws Wednesday night that would give it broad power to block resolutions from even making it to the dais.

In the process, allies of Councilman Ed Zipprich rejected a request by new Mayor Billy Portman that the measure – which no one from the public or media saw in advance – be tabled. 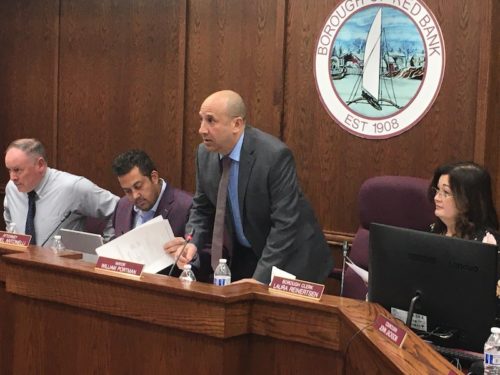 At issue at the borough government’s annual reorganization meeting was a resolution sponsored by Zipprich that would set rules for council meetings: when they’re to be held, the order of business, committee structures and such.

But Councilwoman Kate Triggiano objected, both to specific provisions in the measure and to the fact that no one other than its proponents and borough Attorney Dan Antonelli had seen before Wednesday afternoon, and no one in the public could access it.

She cited section XII of the bylaws, which states: “All resolutions must be endorsed by a Committee chair after a majority vote by said Committee or said resolution must have 3 council members as co-sponsors to be considered at a regular meeting.”

That would effectively bar her from putting any resolutions on the table for discussion, Triggiano said, alluding to her her status as the sole remaining counterpart to the alliance of Zipprich, Angela Mirandi, Michael Ballard, Jacqueline Sturdivant and new member John Jackson.

“This is a lot of hoops to jump through just to get a resolution up for conversation at a workshop meeting, to be considered by the public and to be heard,” she said. “With the current council majority that sits here tonight, I will have no ability to introduce a resolution. I have passed more resolutions on this dais than everybody here combined, because I am in touch with the people and I bring things forward.

“These bylaws are banning me from doing that, unless I get a majority of a committee, and the chair of that committee, or half the people on this dais, to do that,” Triggiano said. Whether as a member of a council majority or minority, she said, “I have never taken steps to censor somebody here from introducing a piece of legislation, and I really think this is abhorrent.”

Triggiano, a longtime Zipprich adversary who wrested control of the Democratic party from him last July, said her first awareness of the six-page document was its appearance among meeting materials given to her hours earlier.

Portman said his biggest concern was the rush to vote on bylaws that council members had only received that afternoon.

“We really haven’t had adequate chance to review them,” he said, just 20 minutes into his role as an elected official. He asked that the bylaws be tabled “so we have a minute to look at them and make sure that nobody has any problems with them.”

Zipprich, however, defended the measure, saying it was copied from one used by Fanwood, a borough in Union County, whose mayor, Colleen Mahr, “is a former president of the New Jersey League of Municipalities, so she does a very good job of offering assistance around the state.”

“I’m certainly not disputing that they work for Fanwood,” Portman replied. “I’m just not sure if we’ve had time to decide if they work for Red Bank.”

Still,  the vote went ahead, with Zipprich and Mirandi noting that the bylaws could be amended in the future. Sturdivant arrived at the meeting late, in the midst of the roll-call vote, and voted in favor. The vote went 5 to 1 to adopt.

Prior to the meeting, Antonelli told redbankgreen that the text of the resolution could not be shared because it had not been adopted.

Immediately after the meeting, redbankgreen asked Zipprich why a resolution that requires committee approval of future resolutions had itself not been subjected to committee review. “Because they hadn’t been adopted,” he said of the bylaws.

By email, redbankgreen asked Ballard, Mirandi, Jackson and Sturdivant their rationales for voting in favor of the measure, and whether the process had met their standard for government transparency.

“These protocol resolutions have never been workshopped or open for public debate before introduction and adoption at the Reorg meeting,” he said in an email. “Also, as stated at the Reorg meeting and in the by-laws, Council members can offer amendments for consideration at any time. All of this is much ado about nothing, designed and perpetuated to continue the ‘chaos’ and ‘dysfunction’ residents have grown weary of.”

None of the protocols, however, set hurdles on the introduction of resolutions or ordinances. The first one, adopted in 2017, generated recurring criticism that it limited public comment and dialogue with elected officials.

At the meeting’s conclusion, several residents in attendance, including Cedar Street resident Sue Viscomi, were upset that none of the meeting materials other than the agenda had been made available to the public, either online or in print.

Moreover, no public comment session was held. Antonelli said that was because the meeting was “ceremonial” in nature.

“How could the borough attorney call this meeting ‘ceremonial’?” Viscomi wrote to redbankgreen afterward. ” They voted on resolutions that included bylaws for all meetings (23-06), a Cash Management Plan (23-09), and a temporary budget (23-10).”