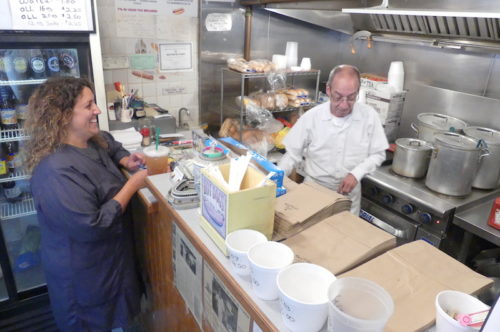 After almost a quarter-century and countless pints of soup, That Hot Dog Place in Red Bank is about to undergo a ladle handoff.

What’s Going on Here? Read on for the answer. 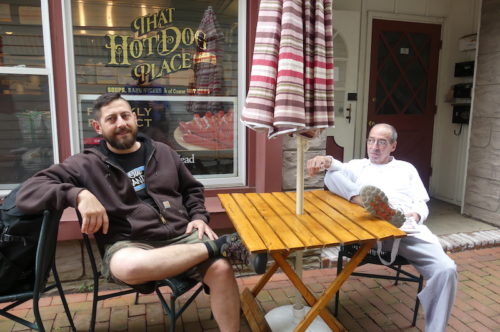 Located in a row of tiny shops alongside the Dublin House Pub, the 175-square-foot takeout restaurant is changing owners.

Gary Sable, 66, who started the one-man soup shop in 1995 — yeah, the business name is a bit misleading — is retiring after Thursday’s lunch, and turning it over to borough resident Steve DeAngelo, who quit his job as a carpenter in order to pursue his passion for food.

DeAngelo plans to give the tiny space a bit of a makeover and open his shop, to be call Soul Sandwich, on Monday, September 9. He tells redbankgreen he’ll be offering all of Sable’s soups, while adding items to the menu, such as a meatloaf sandwich.

First, though, he’s had to capture the recipes for Sable’s estimated soups, none of which had previously been written down.

“I’ve probably got 15 chickens alone,” Sable said. “And I keep coming up with new ones.”

One of his latest creations, added about a year ago, was a chicken pot pie soup, for which he bakes pie crusts and breaks off pieces, which he puts into the serving cups just before adding the steaming, creamy soup.

“It’s big shoes to fill,” said DeAngelo. “I have a lot of respect for the business and the following Gary’s built. So my first thing is not to screw it up.”

Sable plans to be there for the opening. Meantime, he’s been getting a steady stream of well-wishers coming in for their favorites, such as hair stylist Jen Gunther, seen in the top photo, who counts the Spicy Sausage among hers.

“On the last day, I’ll give you a hug, because I don’t want to cry yet,” she told Sable as she left Monday morning.

“How can you not love these people?” Sable said after she left.