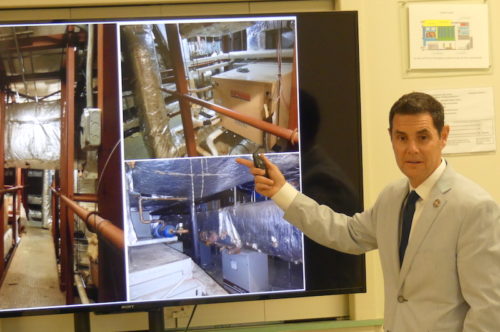 Rumage during a presentation at the borough library last week. Below, Rumage, in hat, with new middle school principal JT Pierson at a gay pride event in June. (Photos by John T. Ward. Click to enlarge.)

In an extended sit-down interview with redbankgreen and at several public events over recent months, the Fair Haven resident reflected on his first half-decade at the helm the pre-kindergarten-to-eighth-grade district.

Throughout, he readily shared credit with the board of education, fellow administrators and teachers for what he described as a “culture change” within the district, which was long saddled with a stigma of inadequacy and now pursues a “best-in-America mindset.”

“I don’t know why that stigma existed,” Rumage said. “And I think even today, it’s still there. It’s just not as large as it was five years ago.”

But “it was a strong school district” when he took over from his predecessor, Laura Morana, “and it’s even stronger now,” he said.

At the time of Rumage’s hiring in 2013, though, the district’s challenges were soaring, with its student population having grown more than 40 percent over a decade. Many of those children spoke little or no English, and the majority of them qualified for free or reduced-rate lunches. [The student population is now “stable” at just above 1,400, Rumage said.]

In the face of tight money, among Rumage’s first moves was to build on the teaching staff. Over the past five years, the district has added 34 teachers, focusing on areas such as its child study team, English as a second language instruction and special education.

The idea, he said, was to put as many instructors with specialized expertise into classrooms “and let them do what they do best” to improve student performance. Today, he said, 60 percent of the district’s teachers have more than one professional certification, and 55 percent of them have advanced degrees.

He also rolled out a rallying cry, using a motto suggested by a teacher: “Dream big. We’ll help you get there.” Morale quickly began to improve, he said.

Rumage’s tenure has included what he calls a “stressful period” that began in late 2015 when the Red Bank Charter School, which was spun off from the district two decades ago, applied to the New Jersey Department of Education to double in size, to 400 students.

Allowing that to happen, Rumage said, would have had a “devastating” impact on the already severely underfunded district.

“I really think we might have had to close our doors,” he told redbankgreen in May. “We would have had to educate pretty much the same number of students with significantly less money, and I don’t know how you do that.”

But the application, which was ultimately rejected by the state, “was a blessing in disguise, because it really gave me the opportunity to change the narrative, to now tell the story of the Red Bank borough public schools,” Rumage said.

Speaking at multiple forums, some attracting hundreds of residents, Rumage used data to show that academic achievement of district students was on par with or even exceeded that of the charter school and nearby suburban districts.

Moreover, the rate of improvement for students was even more striking, he said, a phenomenon that continues. Only 22 percent of district third-graders showed proficiency in English language arts in 2015; by the time those same students reached fifth grade, 58 percent were proficient, Rumage said. Statewide, the average was 56 percent of fifth-graders, “so we are outperforming the state,” he said during a presentation at the borough library last week.

That metric — the rate of improvement in math and English language arts — forms the basis for the newly created Lighthouse District award given by the DOE. This year, Red Bank was among 11 districts statewide, out of more than 600 eligible, to receive it.

At a board meeting last month, Rumage called it “an amazing honor that really validates all the achievements we’ve made over the past five years.”

Board member Ben Forest, who was board president when Rumage was hired, told redbankgreen that being part of the team that selected Rumage is “the single biggest contribution” he’s made as a board member.

“He’s done the impossible,” Forest said. “One of the hardest nuts to crack with our district has been the perception of our schools. From the very beginning, he was able to reach out to the various constituencies and really do a breakthrough on behalf of the district that we hadn’t seen before.”

Still, throughout Rumage’s time, as before his arrival, there’s been a constant shortfall in the amount of state aid mandated under law.

“We were getting only about 33 percent of required funding from the state, while other districts were getting 100 percent, 150 percent, you name it,” he said during a presentation on the referendum at the borough public library last week. Roughly half of that funding had to be passed through to the charter school, he said.

Over the past six years, Rumage said, the state has shortchanged the district by more than $30 million. Which is why he, along with local legislators and cadre of passionate parents, lobbied Trenton for greater fairness in the allocations.

This year, the district is getting slightly more than $6 million in state aid, or about 65 percent of what it’s owed, with a pass-through to the charter school of $2.1 million, Rumage said

“It’s moving in the right direction,” he said, though the fiscal challenges remain significant.

Even with the shortfalls, Rumage said the board has been able to reduce the rate of tax increases in every year of his tenure but one, when it grew “a couple of tenths of a point.” The trend, he said, shows that, “we’re coming in close to cap, that we are efficiently managing our money while still providing the best services we can for our students.”

But it’s also meant making do with deteriorating facilities, which the November 5 referendum is meant to begin addressing.

The $6.75 million plan calls for replacing the rotted roof of the primary school, on River Street, and all the windows at the middle school, on Harding Road. Those projects represent the highest priorities of a laundry list of capital needs that could easily have exceeded $20 million, Rumage said. But asking borough taxpayers to pick up a tab that large, “I’d be out of a job tomorrow,” he quipped at the library.

The timing is right, he said. The DOE has pledged to pay 40 percent of the cost, and interest rates are at historic low levels for the portion taxpayers have to cover. If voters reject the plan, Rumage said, the state money will simply go to another district, and Red Bank taxpayers will be on the hook for the full cost of work that can no longer be postponed.

So far, Rumage’s pitch for the referendum appears to be succeeding, or at least not generating any organized resistance. At the library presentation, only one person not professionally affiliated with the district or involved in fundraising was in the audience, and she spoke in favor of the plan.

With millions more dollars worth of deferred capital needs, Rumage said the era of tight belts is far from over. This summer, he eliminated an administrative position when he elevated James ‘JT’ Pierson from middle school vice principal to principal. As part of the change, primary school principal Luigi Laugelli became assistant superintendent for curriculum and instruction, and Maria Iozzi, who had been middle school principal, moved over to the primary school as principal.

Rumage told redbankgreen that he’d “love to” spend the rest of his career in Red Bank. Meantime, he said, “I’m trying to make sure that I set up this district for success for the long run, to make sure that whoever follows me, whenever that is, that they’re in a position to take the district to the next level.”

Additional information about the November 5 referendum can be found on the district website.