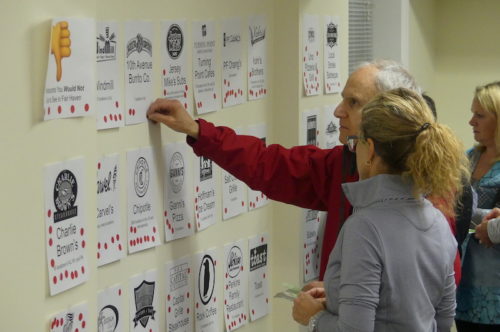 Residents placed red dots on the names of restaurants they would not want to see open in town. (Photo by John T. Ward. Click to enlarge.)

After a prolonged battle over a Dunkin’ donut shop, Fair Haven residents took an “arts and crafts” approach to starting a new dialogue about fast food Tuesday night. 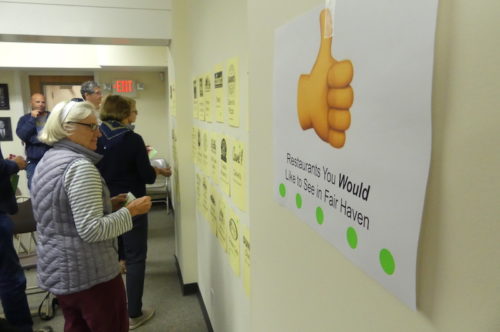 Green dots were used to indicate support for the same set of eateries. Below, zoning board attorney Mike Irene. (Photos by John T. Ward. Click to enlarge.)

Holding its first meeting, a new restaurant committee asked a roomful of residents to place red and green sticker dots on sheets of paper identifying 35 national franchise chains and local eateries with more than one establishment.

None of the restaurants, which included Gianni’s Pizza, Playa Bowls, Subway and Woody’s Ocean Grille, has yet sought to open in town, said committee chairman Todd Lehder, who also heads the planning and zoning boards.

Rather, they were selected to help the committee “get a feel for what the community is really saying” when it says that fast-food establishments degrade the borough’s small-town character, he said.

“We need to understand the details of what might be acceptable and what might not be acceptable,” said committee member Carolyn Ferguson. “This is one of the many times we’re going to come to the public asking for information.”

Going by the number of red dots, the least-liked restaurants include Jersey Mike’s Subs, Starbucks and Subway, whereas Toast attracted lots of green.

Mayor Ben Lucarelli appointed the committee in the aftermath of a controversial planning board decision in August to allow a Dunkin’ coffee shop to open in the River Road shopping center anchored by an Acme supermarket.

Prior to those hearings, many residents were under the impression that a long-standing ordinance banned fast-food restaurants. But that law, adopted in 1973, was repealed by the council in 1998, according to Lucarelli.

Zoning board Attorney Mike Irene, sitting in with the committee, offered the audience of several dozen residents a primer on New Jersey’s Municipal Land Use Law and court cases involving municipal limitations on fast food.

The committee’s objective is to recommend options to the council. A series of meetings is planned, along with a survey that will soon be available to residents, according to Administrator Theresa Casagrande.

Meantime, the Dunkin’ shop has not yet opened for business. Owner Dominic Sequeira told redbankgreen in August that he expected advance work and construction to take several months.