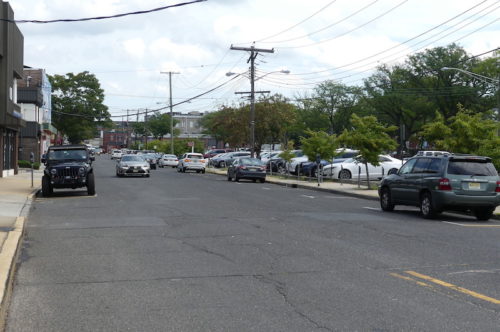 RiverCenter asked that enforcement of any changes to the parking ordinance be postponed until completion of planned streetscape work on White Street and the adjoining lot. (Photo by John T. Ward. Click to enlarge.)

The recommendation by former interim parking director Tom Calu to stretch enforcement beyond the current 6 p.m. cutoff by four hours had been reviewed and cleared by the governing body’s parking committee, said Councilman Erik Yngstrom. Yngstrom is on the committee with council members Kathy Horgan and Ed Zipprich.

The idea “may not be the most popular, but it is something we need to do to better manage our parking inventory,” said Business Administrator Ziad Shehady told the council.

Shehady noted that a 2019 parking study by Walker Consultants recommended that extended parking hours be implemented along with a host of other changes so the borough can utilize existing parking inventory “to its greatest level possible” before taking up the question of whether to build a parking garage.

Referring to what he called “the G word,”  Shehady said, “we can look at that, but not before we implement all the preceding steps” recommended by Walker, he said.

The Walker report, however, recommended that paid parking be extended to 9 p.m. “That’s something for you to decide,” he told the council.

Council president Michael Ballard, chairing the meeting in the absence of Mayor Pasquale Menna, said the council “needs to sit and digest” the recommendation.

Yngstrom said the committee still wants to speak to residents and business owners, in light of “the pushback and the calls we’ve gotten” since the plan was reported.

“We want to step back and speak to people and then figure out where we want to go with this,” he said.

Councilman Hazim Yassin said that as it now stands, “I would be opposed to it, not necessarily long-term. I think we need more time to speak with residents, to speak with businesses.”

But Councilwoman Kate Triggiano argued in favor of moving ahead, though with a 9 a.m. to 9 p.m. paid schedule.

“This has been going on for six to ten years, talking about extending or shifting the parking hours,” she said. “This is not a new thing. As leaders, we’re put here to make decisions.”

She noted that Asbury Park has paid parking until 2 a.m., which doesn’t deter her from visiting. In addition, she said she often sees Red Bank visitors attempting to pay for parking after 6 p.m., and when she tells them it’s unnecessary, “they look dumbfounded.”

“There will always be people who are unhappy, but this is the next step in the parking study,” she said.

Shehady said the issue would be sent back to the parking committee for further consideration, with the full council revisiting the issue at its April 8 workshop session.

But she asked that enforcement of any new parking rules be delayed until after the streetscape work and a reconfiguring of the White Street municipal lot is completed.

Merchants in the area went through a lot of “pain” during a streetscape project just yards away last year, in the area of English Plaza, and while they understand that it will have long-term benefits, “let’s not add another layer of pain,” she told redbankgreen.

Shehady had previously said he wanted to finalize the new enforcement schedule soon because the borough is expecting delivery in May of new solar-powered meters to serve all 452 on-street paid parking spaces. Having a new ordinance in place would allow for the meters to be pre-programmed, and would also give lead time to order new signs, he said.

But “we’re still good with this timeline,” he said after the meeting.