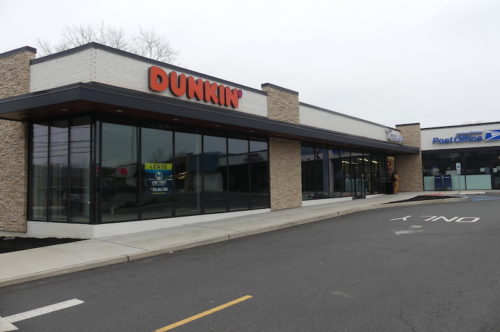 Beneath a photo of the new sign being installed Monday, page administrator Katy Badt Frissora said the ensuing comments could serve as “today’s quarantined entertainment.”

What followed, so far, has included some grumbling about the shop as a dreaded destination for caffeine addicts imperiling the safety of all who get in their way, and sidelong swipes at “yuppies with their $2k home espresso machines.”

Others weighing in continue to lament what they see as a breach in the towns’s character as a place of (mostly) mom-and-pop shops.

But commenters have largely cheered the anticipated opening, and there’s been no sign of the venom that prompted the moratorium on comments. A sampling:

• Better than a vacant spot!

• Better put those no parking fire lane signs up now, it’s gonna be like White St in Red Bank , a blatant disregard for the flow of traffic and others.

• The final sign the End of Days is upon us🤣

• I’m just tuning in now – did anyone mention McMansions yet??🙉🙊🙈

• Is this really worth all of the energy that went against it? Will this recent tragedy help anyone understand how trivial the fighting was?

The shop is to be operated by Dominic Sequeira, of Lincroft, whose family business also owns Dunkin’ shops in Red Bank, Tinton Falls and Lincroft.

On Tuesday, Sequeira told redbankgreen he doesn’t have a projected opening date, given the uncertainty of the COVID-19 crisis.

Meantime, borough resident Andrew Reger filed separate lawsuits against both the zoning board and planning board over procedural decisions made during the plan review.