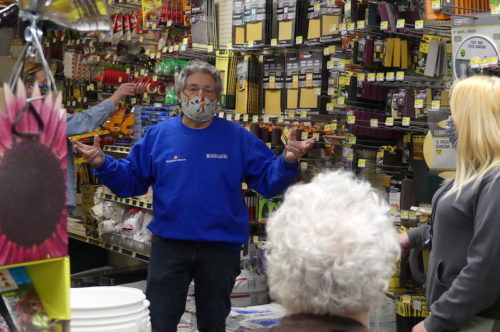 Testing the waters in the COVID-19 era, Fair Haven Hardware reopened for business Tuesday morning – with some new rules for employees and customers to observe.

“We don’t know how this is going to work out,” co-owner Harvey Schooman told redbankgreen. “So we’ll see how it goes.” 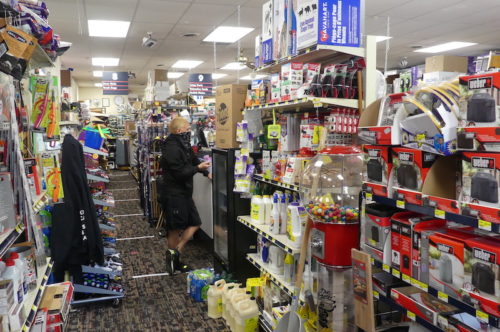 Floor markings indicate six-foot spacing to be observed by customers and employees. Below, a customer checks out paint color swatches. (Photos by John T. Ward. Click to enlarge.)

As a business considered essential under Governor Phil Murphy’s March 21 shutdown order that effectively paralyzed the state’s economy, the shop  was permitted to, and did, stay open for business.

But after 10 days, concern for the safety of his employees prompted him to close the shop, Shooman said.

The nature of the business is to help customers find products literally as small as nuts and bolts, and because it’s a small shop, “people were on top of each other,” he said.

“Frankly, I got spooked,” Shooman said. “There were people coming in, not wearing masks, not social distancing. There were a lot of people in the store. I closed down, basically, for the safety of my employees.”

A month later, the shop’s employees agreed to reopen. Why?

“The community wanted us to reopen, and we rendered a plan so everybody would feel safe,” Shooman said.

Under the plan, the shop is open on a limited schedule of 10 a.m. to 3 p.m. All customers must enter through a rear door and exit through a side door. Only five shoppers are allowed in at once. Everyone must wear face coverings and maintain six feet of separation from others.

“If somebody needs a screw, we’ll go get it for them while they stand six feet away,” he said.

Shortly before 10 a.m. Tuesday, a half-dozen well-spaced customers were outside the store waiting for it to reopen. Among them was Fair Haven resident Mike D’Angelo, who came by to pick up gardening supplies.

If the store hadn’t reopened, he’d probably be shopping at a big-box retailer, he told redbankgreen, “but I’d rather support a local business.”

“They’re doing it the right way,” he said of the shop’s owners.

Shooman said he sees the reopening as something of a test. As circumstances both within the store and more broadly allow it, he’ll expand the hours or loosen the restrictions.

“If it becomes burdensome and people don’t listen, then I’ll shut it down again,” he said, though he said he’s confident his customers will comply.