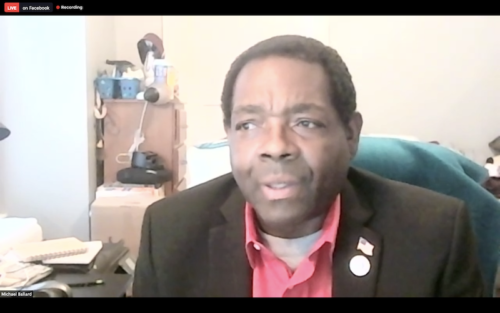 Councilman Michael Ballard during an online meeting in May. (Click to enlarge.)

Delayed by the COVID-19 pandemic, Red Bank’s proposed budget for 2020 would boost the amount to be raised from local property owners by 5.4 percent.

But heading into the final stretch, it’s not clear that the chairman of the finance committee will support the spending plan if it goes to a vote Wednesday night.

To get there, the borough has to exceed a state-mandated 2.5-percent budget cap by an additional 1 percent, or nearly $180,000, putting the overall increase in spending at $629,000.

At its introduction last month, Councilman Michael Ballard, who chairs the finance committee, said he could not vote in favor of it without changes.

“This is not a budget I would ultimately vote to pass,” he said. “I think there’s work that can be done and will be done on this budget before I would ever support it for final adoption. But I will move it forward on the caveat that there will be amendments coming forward.”

He did not specify where he wanted to see cuts.

As of Friday, however, the spending plan had not been amended, Business Administrator Ziad Shehady told redbankgreen.

Asked what changes he wanted to see, and if he would still vote against it, Ballard told redbankgreen by email only that “a list of proposed budget amendments has been submitted to the Administrator by the Finance Committee.”