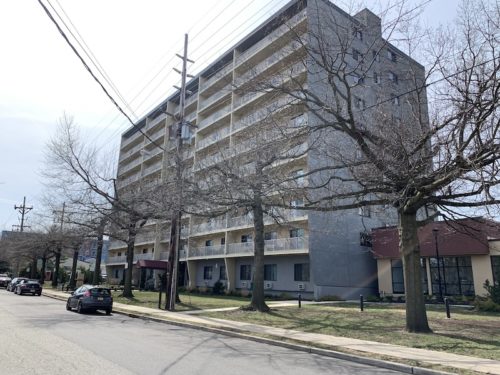 Like the earlier rounds in the dispute, Thursday night’s hearing, conducted via Zoom, had earmarks of a courtroom trial. Chris Healy, lawyer for building owner PRC Group, summed up his case, and the board’s attorney cited extensive caselaw.

At issue, initially, were claims by 10 tenants of the 10-story building that, through their rent, they were being charged for a pool and gym they couldn’t use all summer.

By Thursday, four were still pursuing the matter.

PRC maintains the tenants are owed an “insignificant” sum, at best. Company officials contend that “real world” COVID-19 restrictions imposed by Governor Phil Murphy accounted for the pool shutdown through June, as well as the closure of the gym at the Morford Place building, said Healy.

Then, after Murphy lifted his restrictions on pools July 1, the company was unable to hire lifeguards and pool “ambassadors” to check-in pool users and keep bathrooms clean, an executive testified in August.

His evidence: no other apartment complex in Red Bank offers a pool, and yet all charge higher rents than Grandville Towers.

“So, if any of these tenants were to say, ‘I’ve had enough, I’m moving out to a place that doesn’t have a pool so I can pay less rent,’ they’d be out of luck,” Healy told the board.

All of those arguments could be considered mitigating factors, board lawyer Gene Anthony advised the board. But first, he said, the board needed to ascertain if the closure of the pool constituted a reduction of service.

The five board members in attendance unanimously agreed that it had.

“To deny them access to the pool area for grilling or whatever other amenities are there for them, that was not right,” said board chairwoman Gale Soler.

Board member Judy Giunta noted that one tenant testified the pool was “her only source of outdoor space.”

“I don’t think it’s minimal,” said board member Scott Heck, referring to tenants who testified they had to travel to the beach or elsewhere to get what they couldn’t at home.

“Just the mere fact that they would have to leave the complex and go someplace else, even if it’s just five minutes away, is significant,” he said.

The hearing is expected to continue at the October meeting.