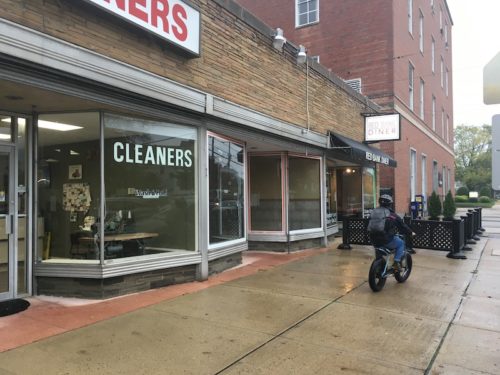 Another pizza restaurant plans to take the vacant former home of Pacini’s at 177 Broad Street. (Photo by John T. Ward. Click to enlarge)

Commercial real estate activity may be down because of the COVID-19 pandemic, but Red Bank continuues to attract small shops that want in on whatever action is happening.

In this edition of redbankgreen‘s Retail Churn, we’ve got word on a new pizzeria and a juice bar signing leases, and the sale of a giant building in the heart of downtown. 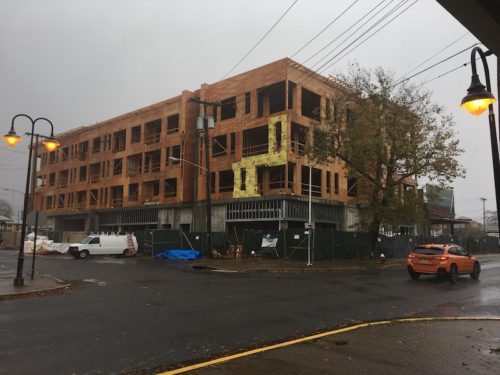 Melonhead plans to take ground-floor commercial space at The Rail, now under development next to the Red Bank train station. The former Hobbymasters building, below, has a new owner. (Photo by John T. Ward. Click to enlarge.)

• Another pizza restaurant plans to open in the space last occupied by Pacini’s Pizzeria, at 177 Broad Streeet.

Artichoke Basille’s Pizza, a New York City-based franchise, plans to open a company-run store in the middle portion of the three-storefront building, between the Red Bank Diner and Red Bank Cleaners.

A press release announcing the deal said the store will open “this holiday season.” The 1,800-square-foot restaurant will be the chain’s 16th, and the second in New Jersey; the other is in Hoboken.

Pacini’s vacated the address in July, 2019 after almost a decade there. Prior to that, the space had been used by a photo processing shop before enduring a long vacancy.

• Denholtz Properties, which is building the massive Rail mixed-use project alongside the Red Bank train station, said it has signed its first retail tenant for the site.

Melonhead, a juice and smoothie vendor in Sea Bright, will take 565 square feet of ground-level commercial space, the developer announced this week. An April opening is anticipated.

The 1.65-acre Rail project, with 57 apartments, underground parking and 6,500 square feet of retail space, is expected to open sometime in the second quarter of the year, the announcement said.

• The planned sale of the former Hobbymasters building, which redbankgreen reported shortly before the pandemic hit, went through in September.

The Philip J. Bowers Company, based in Tinton Falls, was the buyer, paying the odd sum of $581,730, according to Monmouth County records. Arlene Placer, who owned and ran the hobbyist’s nirvana for four decades before retiring, was the seller.

John Bowers, whose family-owned property business owns multiple buildings on White Street and English Plaza, as well as the nearby City Centre shopping center, told Churn he was not yet ready to announce plans for the two-story, 11,000-square-foot, solar-powered building, located at 62 White.

The borough recently completed a street makeover, complete with a widening and the creation of angled parking on one side, along a stretch of White Street just out front, and is nearing completion on the municipal parking lot across the street.

Posted on October 30, 2020 at 7:57 am, filed under Business, Featured, Food and Drink, Government, Land Use & Zoning, Real Estate, RED BANK, Restaurants, Retail Churn, Retailing and tagged nj, red bank, RiverCenter, zoning. Bookmark the permalink. Follow any comments here with the RSS feed for this post. Trackbacks are closed, but you can post a comment. Email this story.
PREVIOUS: RED BANK: CONCERT OFF, LIGHT-UP STILL ON NEXT: RED BANK: RIVERVIEW TOP EXEC RESIGNS