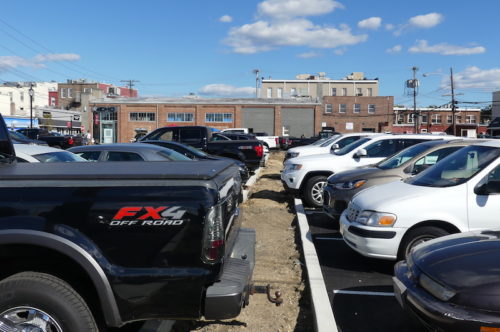 The council introduced a parking ordinance amendment that requires vehicles to be parked “head-on” into spaces, rather than backed in.

The aim of the change, according to borough Business Administrator Ziad Shehady, is to keep vehicles from overhanging the new walkways that separate parking aisles.

The issue is particularly evident with large pickup trucks that have long clearances between their rear tires and bumpers, he said.

“They keep backing up” until the rear tires touch the curb, he said, resulting in obstruction of  the walkway.

In changes to the existing “prohibited activities” section of the law, only parking “head-on” into spaces would be permitted.

The rule would apply to all municipal lots, although only the White Street lot has dedicated, Americans With Disabilities Act-compliant walkways, which were created as part of a recent reconfiguration of the 2.3-acre facility.

So what about those who do park head-on and still encroach on the path, as seen above?

Section D of the ordinance prohibits parking “across any line or marking of a parking space or in such position that the vehicle shall not be entirely within the area designated by such lines or markings.”

A final vote on the amendment was scheduled for October 28. (Photo by John T. Ward. Click to enlarge.)