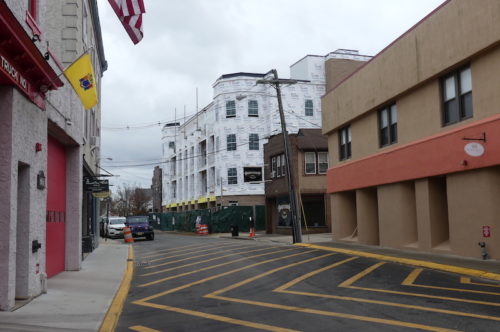 After months of abandonment, a downtown Red Bank site is on its way to becoming home to 24 individuals and families. The site as it appeared in 2017, above. Below, a rendering of the project now under construction and called the Forum. (Photos by John T. Ward. Click to enlarge.)

The location is 24-30 Mechanic Street, where borough inspectors halted a prior owner’s work in September, 2017, just days after excavation began.

At issue: inadequate stabilizing of resulting hole in the ground, which threatened the structural integrity of the former Independent Engine firehouse next door, as well as an adjoining sidewalk, officials said.

Though the excavation was later refilled for safety reasons, the project, called Riverwalk Commons, never resumed, and went into foreclosure.

Two years later, through an entity called HRK at Red Bank LLC, builder Mazin ‘Patrick’ Kalian acquired the property and approvals to build. He began erecting 22 luxury apartments and two affordable units about a year ago for a project he rebranded the Forum.

Last Wednesday, project manager Terry Deodato gave redbankgreen a tour of the site, where the Tyvek-wrapped four-story structure is just about buttoned-up and ready for interior sheetrocking.

With grade-level parking underneath – accessed exclusively via the East Side parking lot, per an agreement with the borough – each of the three floors of living space features eight uniquely laid out units, some as large as 1,300 square feet.

On each floor is a central common area: one for storage, one a gym and one a lounge for tenants and their guests. Another perk: the roof will feature an expansive deck with views of the Navesink River.

Occupancy is expected to begin in July, Deodato said.

The former firehouse, meantime, was renovated by a private owner and opened a year ago as Nest, a furniture store.