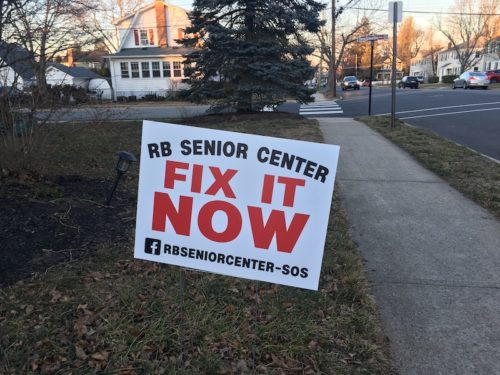 Supporters of a drive to repair and reopen Red Bank’s Senior Center plan to rally at the facility Saturday for the second time this year.

The Shrewsbury Avenue facility has been mothballed for two years, first as a result of damage from a burst pipe in the fire suppression system, and later over safety concerns discovered during an inspection after the system was repaired. Borough Business Administrator Ziad Shehady has said the riverfront property would require an investment of hundreds of thousands of dollars to reopen.

A council majority has declined to commit funding for the work while the Redevelopment Agency, an advisory commission, nears completion of an ongoing review of all municipal properties. Meantime, in January, the governing body approved a three-year lease at Trinity Episcopal Church, on West Front Street, to serve as an interim senior recreation facility once pandemic restrictions ease, allowing seniors and others to congregate indoors there.

Tiffaney Harris, a former Senior Center outreach worker and organizer of the January 9 rally, told redbankgreen that this Saturday’s event is being held because “many who were not able to attend the first rally wanted a second to send a clear and resounding message to the elected officials that they are tired of being mislead about the plans for the Senior Center. We want it fixed and want it fixed now.

“No public-private partnerships, No adding levels, No gyms, and certainly No apartments built on top,” she said via email Monday. “The Council needs to do its job and fix the senior center so our Seniors can return to their rightful home, which was intended for them when Ethel Frankel, the very first Senior Citizen Director fought for them to have years ago.”

The event is scheduled to begin at noon.