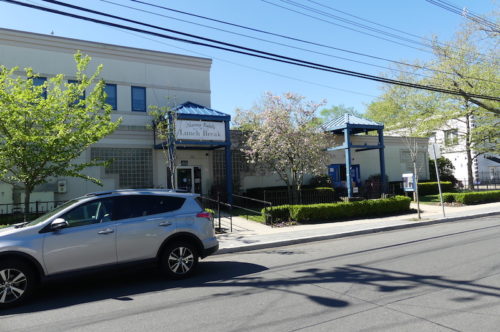 The project, Renew the Promise of Hope, is designed to renovate the present space and expand the building into an adjacent vacant property in order to offer more self-sufficiency programs and increased community partnerships.

The building renovation and construction of new spaces will provide much needed facilities for food storage, an expanded pantry, kitchen and dining facilities, education rooms, and incorporate the Life Skills Center, which is now off-site.

“Our expansion plans have emerged from the faces of expectation, appreciation, and gratitude we see every day at Lunch Break,” said Lunch Break Executive Director Gwen Love. “Current facilities are quickly becoming outdated, and Lunch Break needs more space to deliver its mission. While the effort needed to provide meals and programs is at times daunting, we will not shrink from the challenge as poverty knows no borders.”

In 2013, with an eye toward expansion as the number of visitors to Lunch Break substantially increased, the organization conducted its first capital campaign.  Completed in 2015, the expansion included funding for the eventual purchase of the adjacent property.  With the onset in 2020 of the global pandemic, Lunch Break was operating at full capacity and the need for additional space became critical. Fortunately, the next-door property became available for purchase and it now is the site of the current expansion.

Lunch Break in its 38-year history has played a significant role in helping people who face hunger. The organization grew from humble beginnings into a multi-dimensional center of hope and possibility that today feeds thousands of children and families every year. In addition to providing nutritious meals free of charge, the expanded Life Skills program rebuilds lives through more than 22 services, including job placement and resume/interview coaching. More programs are planned with the expanded facilities.

Lunch Break reports grab-and-go meals were up 21 percent since 2019, grocery distribution was up 111 percent. More than 11,454 were served in 2020 than in 2019. The COVID-19 Emergency Fund distributed more than $800,000 for the payment of basic life necessities, including utilities, car payments and cable service. The Life Skills Program offered 100 to 215 virtual coaching sessions each month and front-line volunteers gave 11,500 hours of service.

The members of Lunch Break’s Board of Trustees, its staff and volunteers, believe the expansion of facilities and services is more crucial now than ever. In New Jersey alone, 865,900 people, including 260,340 children, are food insecure, according to Feeding America and Hunger Free New Jersey, That means 1 in 10 individuals (9.6 percent) and 1 in 8 children (13.2 percent) live in homes without consistent access to adequate food.

Across Monmouth County, the rate of hunger among seniors has more than doubled since 2001, according to the National Council on Aging, a rate that is expected to increase as Baby Boomers age. About 10 percent of New Jersey’s older residents, some 190,000 seniors, were at risk of hunger in 2017 and these numbers are rising quickly.

New Jersey has the highest rate of unemployment among veterans according to the United States Department of Labor. Nearly 11 percent, about 10,000, veterans are unemployed. These veterans rely on food pantries such as Lunch Break to survive.

“In the end, Lunch Break’s future building plans are about generating social change and improving the human condition for many of our fellow citizens who need help,” said Board President Phil Antoon. “The renovations and expansion will make it possible to keep the dream alive in people’s lives. We are investing in humanity.”

“The staff and 2,000 dedicated volunteers recognize the opportunity to transition even more people from a state of urgency to a life of agency,” Klein said. “The barriers and roadblocks to doing more and being more are centered on the ability to upgrade facilities and expand the organizational footprint with more space. We need to do this … and we are excited about the impact it will have.”

The Lunch Break Board in 2020 conducted a thorough feasibility study, the results of which confirmed very strong community support for the expansion campaign, as well as a solid trust in Lunch Break to complete the project. With input from design and land use professionals, architectural and engineering plans have been submitted to the Borough of Red Bank Zoning Board for review.