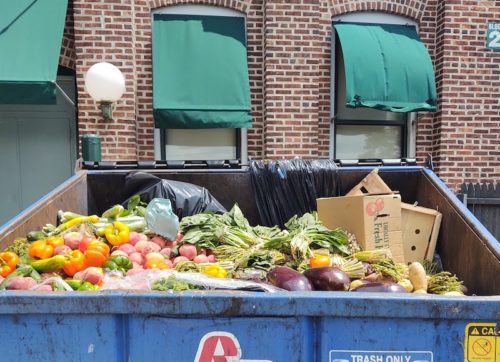 Customers of the Red Bank Farmer’s Market were alarmed to see good produce tossed into a dumpster Sunday. 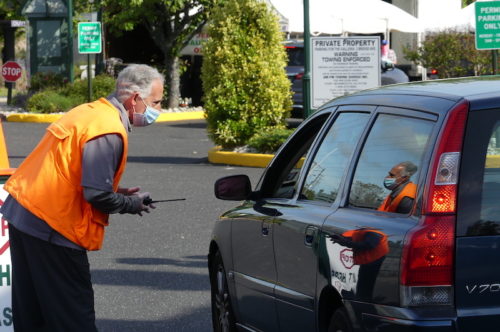 George Sourlis speaking to Farmers’ Market customer at the seasonal opening of the event in 2020. (Photos by Lorraine Mannix, top, and John T. Ward. Click to enlarge.)

Borough resident Lorraine Mannix discovered the discarded bounty as she passed the bin while entering the market, she told redbankgreen via email.

The message was also addressed to Mayor Pasquale Menna, other local elected officials, and the owners of the Galleria of Red Bank on West Front Street, where the market operates Sunday mornings. Also copied were JBJ Soul Kitchen, located just steps away from the dumpster, and Lunch Break.

“We were shocked, and noticed that the vegetables and greens that were in the dumpster were not spoiled and looked fresh,” she wrote. “It was so jarring to see a dumpster filled with fresh produce.”

As she left the market, she saw a man throwing away produce he had carted over to the dumpster from one of the market’s farm stands, Mannix said.

I ran up to him and asked why wasn’t this food being donated to food pantries, food banks or homeless shelters? He told me that the owner donates a lot of food- 2 or 3 truckloads at a time and that this food was going to go bad in a few days anyway. I’m not a chef nor a student of the culinary arts, but I do know when I see edible food. He then asked me if I wanted some of the food from the dolly, which I took and it looked excellent. As I turned around to get my phone from my car to take a pic of this reprehensible site, a few people walked by and I told them to go get the free food. Dolly-man hurriedly finished what he was doing and went back to the Market. Three other people walked by, stopped and couldn’t believe what they were seeing – calling it disgraceful and shameful.

“I am not experienced in what is involved with the logistics of food growers and suppliers to Food Banks and Pantries but with the increase of food insecurity in this county, this is unacceptable and extremely upsetting to see,” Mannix wrote.

Separately, Bank Street resident Brian Donohue posted photos of the dumpster cache on Instagram after he spotted it.

“I almost took the strawberries,” he wrote. With both JBJ Soul Kitchen and Lunch Break nearby, the discard of fresh fruit and vegetables “makes it more puzzling to me,” he said.

The market operates Sundays-only from May through October in the parking lot of the Galleria, property owned by members of the Sourlis family of Rumson.

Company principal George Sourlis responded to Mannix an hour later, telling her via email that the market’s vendors “donate a substantial amount of food to the local Red Bank food banks.

“Unfortunately, the food banks are limited as to the amount of food that they can transport or store for their patrons,” Sourlis wrote. “Therefore, there is a relatively small portion of food that gets discarded.

“All of the produce is carefully and painstakingly sifted through to ensure that only the freshest food is donated,” Sourlis continued. “The items that have the shortest shelf life, unfortunately, are tossed away.”

Mannix said she was “happy to hear” of the donations, and suggested that “food slated to be dumped by that vendor go to the side and allow customers to go through and take for free.

“Whatever is leftover at the end of the day can get thrown away in the dumpster,” she wrote. “I witnessed two people that walked by and saw that dolly filled with produce about to be dumped and they ended up taking as much food as they could carry. I’m pretty sure more food in that dumpster would have been taken home yesterday.”

Mannix had some of the broccoli and zucchini she salvaged with her dinner Sunday, and “it was more than fine,” she said.

Among the suggestions in response to Donohue’s post: involve an organization such as Table to Table, a Bergen County nonprofit that collects surplus produce, whole grains and lean protein for distribution to feeding agencies.