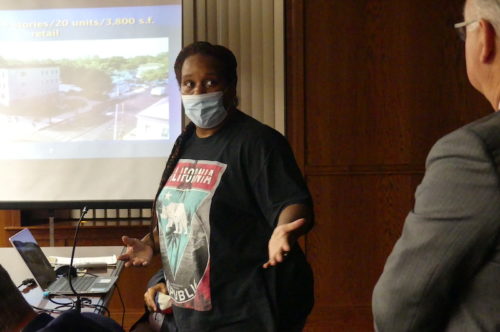 The move, coming moments before an expected up-or-down vote by the zoning board, was a win for residents who opposed the plan as gentrifying to a low-income area. 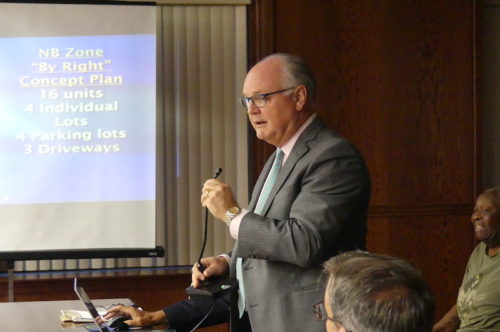 Roger Mumford, above, and Locust Avenue resident Henry Tindal, below, at the hearing. (Photos by John T. Ward. Click to enlarge.)

The hearing, which ran for three hours, concerned Mumford’s plan for apartments at 234-240 Shrewsbury Avenue, on the southwest corner of River Street. The project “The Parker at Red Bank,” needed height and density variances.

Since the board review began, in March, via Zoom meetings, Mumford had twice scaled back his initial proposal, a four-story structure with 23 apartments and ground-floor retail space, to three stories and 16 units.

The plan, he said, had emerged after he met with then-planning director Glenn Carter. He said Carter had advised him that while zoning would allow him to erect four two-story buildings of four apartments each, with retail, such a plan would not be welcome because it would create multiple driveways.

At the in-person meeting Thursday, Mumford said he was again asking for four stories and 20 units, because anything less was not economically viable.

“It’s my business to know the numbers, and I really know them well,” he said. “It’s not a case of three stories being less profitable. It’s a case of the only way way you could even qualify for permanent financing is to leave such a disproportionate amount of equity in the building that the returns would be literally abysmal.”

Mumford said that while reverting to an earlier proposal, he had also “significantly softened” the building’s appearance by changing the red brick exterior to a white painted brick, while retaining a public plaza at the corner of River Street and Shrewsbury Avenue.

But with an audience already opposed to the plan, Mumford sparked outrage when, in response to a remark by board member Bruce Maida that “this is not ‘Dead Bank’ anymore,” he replied, “it is over there.”

Linda Clark, of River Street, asked Mumford what made him able “to judge anybody else’s quality of life. You sit there and judge that somebody is in ‘Dead Bank,’ when it might be the only livelihood that they have.”

A stream of residents followed, challenging Mumford on the affordability of the units he would build; the displacement of two current tenants; the impact on traffic and the movement of buses too and from the nearby Red Bank Primary School, and other issues.

Citing his track record as a builder in Red Bank, Mumford said he had not, “to the best of my knowledge, displaced anyone,” and would “find what we need to do that’s agreeable” should anyone face removal.

Planning consultant Christine Nazzaro Cofone, testifying for Mumford, said the project would provide two apartments qualified as “affordable” for at least 30 years, in place of housing that at present could be eliminated by another owner.

Commenters, however, expressed doubt that anyone who lives in the neighborhood could afford rents that Mumford said would start “in the low two-thousands” for a one-bedroom unit and more than $2,600 per month for a two-bedroom.

Young college graduates would be priced out, said Alecia Wilkerson, of River Street. “I already know who your units are designated for,” she told Mumford.

Henry Tindal, a 37-year resident of Locust Avenue, called the project “baffling” and “completely out of place” for a number of reasons, including the creation of a public plaza that he said would not be used by the public.

Quanasia Frost, of Bank Street, said Mumford should build according to the zoning.

After a two-minute consultation with his attorney leading up to board discussion and a possible vote, Mumford told the board he was withdrawing the application.

But he also pressed board Chairwoman Lauren Nicosia for “a little bit of direction” about how a developer who wants to address a long period of “neglect” on the West Side should proceed, apparently referring to his efforts to get pre-plan input from Carter.

“To not recognize the neglect over a period of time that the people have suffered there is unbelievable,” he said. “It’s a huge void here, it’s not fair to the developer and I need direction.”

“I’ll be glad to have a cup of coffee with you sometime after this is all resolved,” Nicosia said.

The board accepted the withdrawal “without prejudice,” meaning it could be revisited at a future date.

Afterward, Mumford told redbankgreen that his decision was neither impulsive nor based on passion, but declined further comment.