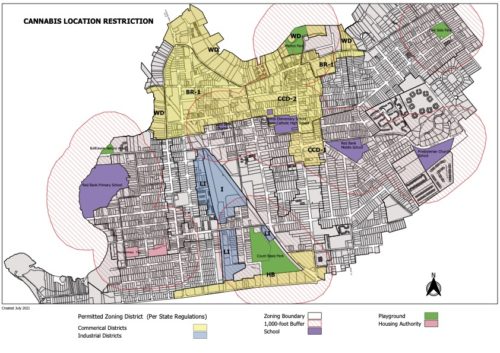 Map indicates areas of town that are off-limits for cannabis operations and sales with cross-hatching outlined in red. (Click to enlarge.)

A proposed $10,000 fee for licenses to grow, store or sell cannabis was flagged as possibly problematic by Red Bank’s borough attorney last week. 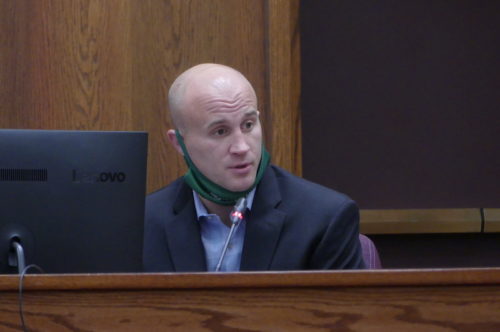 Her office has received a number of inquiries about retail use, she said, but thus far, the borough has only addressed the land-use aspect of the newly legalized drug, and doesn’t have a system for issuing licenses.

Tinton Falls and Eatontown both charge licensing fees of “about $10,000,” she said. The fee applies to all six categories of cannabis operations, from cultivation and warehousing to retail sales, she said.

According to centraljersey.com, the Eatontown businesses would pay $2,500 for subsequent annual license renewals.

The creation of a licensing process and fee is “highly recommended by” the Cannabis Regulatory Commission, Ebanks said, because “it follows the line of their licensing procedure.”

But borough Attorney Greg Cannon raised the possibility that the fee might be challenged as discriminatory and at odds with the social justice aims of legalization.

“Obviously, the $10,000 fee sounds like an awesome idea from a municipal revenue perspective,” he said. “But the stated legislative intent of that law is social justice” to address decades of enforcement inequities and to ensure participation in the market by small business, he said.

Cannon said he would have to look into the CRC’s licensing regulations to determine what, if anything, the agency says about municipal fees.

“But $10,000 just seems like a lot,” he said. “Most municipal fees are based on what it costs to actually process the application.”

He said he expected that “the first person to apply” who can’t afford the fee in Eatontown or Tinton Falls will challenge it in court.

Red Bank, he said, “is very pro-social justice, and that’s a very high fee in that regard, and I’m not sure it’s legal.”

He said he didn’t want to see the borough end up “both stymying the market and fighting over $10,000.”

Cannon reiterated that he needs to review the state law and regulations “before we start throwing numbers into an ordinance.”

Councilwoman Kathy Horgan suggested a sliding scale of fees depending on the classification.

Mayor Pasquale Menna asked that Cannon prepare a memo for the governing body.
“We all agree there should be a methodology” for licensing, he said.

But applicant Andy Zeitlin told redbankgreen he’s not yet ready to discuss his plans, which also require approval by the CRC. The agency won’t even begin accepting applications for retail licenses until March. Meantime, no hearing on the borough application has been scheduled.

Following passage of a statewide legalization referendum in November, 2020, the council approved a zoning ordinance in August that allows retail cannabis sales in a stretch of the Highway Business zone along Newman Springs Road; the Business Residential-1 zone; the CC-1 and CC-2 zones downtown; and the Waterfront Development zone.

Retail sales would be a conditional use, meaning applicants would be required to present their plans to the board.

As per state law, the borough plans to impose a local excise retail tax of 2 percent and a wholesale tax of 1 percent.