A rendering of the proposed development, as viewed from River Road and Cedar Avenue. (M&M Realty Partners. Click to enlarge.)

More than a century into its existence, Fair Haven is on track to get its first-ever apartment project following planning board approval Tuesday night.

The milestone went unmentioned, however, as the board spent three-plus hours reviewing plans for the multiuse development of stores and housing on a former gas station site. 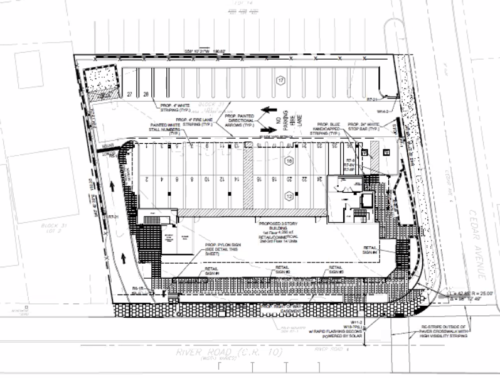 A site plan shows River Road at bottom, with the proposed enter-only driveway at the left. (Screenshot from Zoom. Click to enlarge.)

Instead, board members, meeting via Zoom, explored possible changes to an entry-only driveway on River Road; an eight-foot-tall monument sign advertising the ground-floor businesses; and the fate of two large trees, among other concerns.

The plan, by M&M Realty Partners, of Piscataway, calls for a three-story building fronting on River Road at the corner of Cedar Avenue. Fourteen apartments, two of them set aside for low- and moderate-income tenants, would occupy two floors above 4,250 square feet of retail space.

The space could accommodate up to three commercial tenants, though no leases have yet been signed, M&M executive Ron Aulenbach told the board at the opening of the hearing in December.

The driveway, and a two-way driveway on Cedar, would serve a parking lot on the southern half of the site, with tenant parking tucked, at grade, beneath a portion of the building’s upper floors.

Neil Tirrato, owner of the house next door to the M&M site, praised the overall plan. “Believe me, nobody’s happier about this than I am,” he said. But he pressed for a change that would prevent vehicles from cutting close to the apron of his driveway when making a left turn into M&M’s River Road driveway.

M&M needs a waiver for the River Road driveway from the Monmouth County Planning Board. Last month, that board’s development review committee asked M&M to “demonstrate the necessity and public benefits” of the driveway in light of its proximity to the easterly property line, according to an exhibit.

Board member Brian Olson asked if left turns into the site could be prohibited.

That idea, said Aulenbach, “I don’t think is something we can live with.”

But he agreed to reduce the width of the driveway by one foot, to 11 feet, in order to address Tirrato’s concern, as well as to increase the buffer along the site’s eastern edge, where one of two large trees is to be preserved.

Board member and Councilwoman Betsy Koch asked if a vote on the plan could be delayed until the county makes its decision. But M&M’s attorney, former Middlesex County judge Doug Wolfson, said legal precedent prohibited such delays.

Board Chairman Todd Lehder added that if the county rejects the driveway, M&M will have to return to Fair Haven with a revised plan.

The proposed sign, to be located alongside the eastern driveway, might be suited for a highway, with motorists in “higher-speed cars looking to see what’s there, rather than pedestrians a bikers that might not necessarily need such a large sign,” said board member Sheri D’Angelo.

Aulenbach noted that the sign conformed to borough ordinance, but said he would look into shrinking it and moving it further away from River Road.

Board approval was unanimous.

The project is believed to be the first development of more than a few living units under one roof in the 110-year history of the borough. It came largely pre-packaged to the board, following months of negotiations leading to a settlement with the Fair Share Housing Center over the borough’s affordable housing obligations. No variances were sought.

Application documents can be found here.