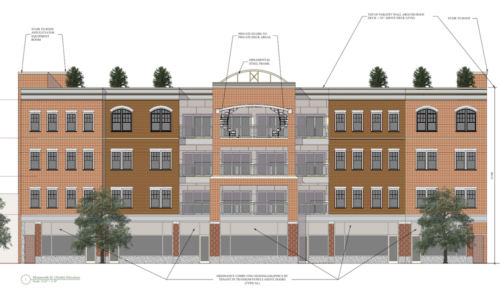 An elevation showing the Monmouth Street side of the proposed mixed-used project. (Rendering by SOME Architects. Click to enlarge.)

More than two years after the developer hit the pause button, the Red Bank zoning board’s review of a plan for apartments on Monmouth Street is slated to resume next week.

The proposal is listed at the end of a packed agenda that includes a clinic expansion, a new medical office and requests for commercial signage. 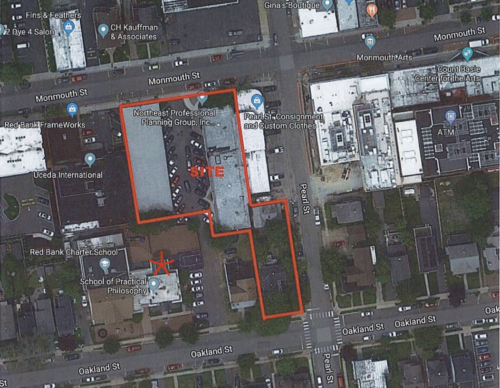 The assembled lots would form a dogleg alongside the Red Bank Charter School, marked with a star above. The former Big Man’s West, below, would be razed. (Photo by John T. Ward. Click to enlarge)

Michael Salerno’s plan now calls for 45 apartments on three stories above retail, compared to an original proposal for 59 units.

The project address is given as 121 Monmouth Street, now the site of an office building, though it would incorporate several properties on Monmouth, Pearl and Oakland streets to form an irregular parcel alongside the Red Bank Charter School.

Among the buildings to be demolished is the long-vacant, onetime home of Big Man’s West, a nightclub owned by the late rock saxophonist Clarence Clemons.

Parking for the tenants would be provided by 57 ground-level spaces beneath three floors of apartments, and another 13 fronting on Pearl Street, the plans indicate.

A calculation by the applicant indicates a need for a variance to allow a 27-space parking deficiency.

The plan also calls for about 2,000 square feet of ground-floor retail and office space along Monmouth Street.

• An addition to 173 Maple Avenue, at the northeast corner of Waverly Place, for use as a medical office.

• Signage requests by the Bank of America at 170 Broad Street and Napoli restaurant, at 10 Wallace Street.

• A request for an addition to the Parker Family Health Center at 211 Shrewsbury Avenue.

The meeting is scheduled to be held via Zoom at 6:30. Public access and participation details can be found here.