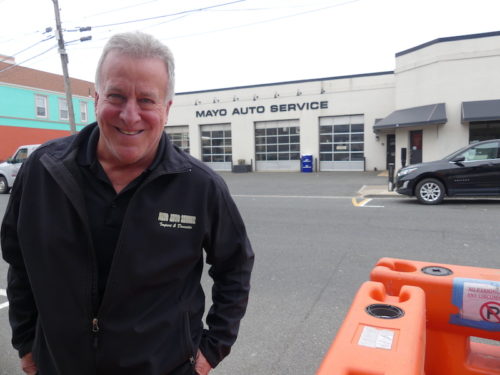 The Denholtz Properties juggernaut continues, with the Red Bank real estate development company about to acquire another key block of sites in town.

Mayo Auto Service owner Pete Soviero has agreed to sell the Monmouth Street property alongside the train station that’s been home to his business for the past 18 years, he confirmed to redbankgreen last week.

But the shop is “not going anywhere” for several years, he said. 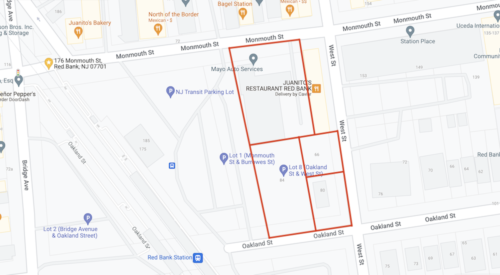 The price was not disclosed in a contract filed with Monmouth County last month.

Steve Denholtz, chief executive of the development firm, confirmed his intention to buy the property but did not immediately comment on his plans for the site. He said he would have “a lot to talk about” during an upcoming scheduled interview with redbankgreen.

Included in the deal are four abutting lots flanking the east side of the train station. The largest of them is the auto service building at 165 Monmouth Street.

Also included are a house at 80 Oakland Street, at the northwest corner of Oakland and West streets, and two vacant lots used for vehicle storage.

Not included is Juanito’s Restaurant, at the southwest corner of Monmouth and West.

Though Soviero, 63 years old, expects the deal to close this month, his business is staying put for several years under a leaseback agreement with Denholtz, he said.

“I’m still going to be here, probably until well into 2025, serving my customers and the community, as I have for the past 45 years,” he said. After that, there’s a possibility he would relocate the shop, which employs a dozen service technicians, he said.

“I made a promise to my wife that when I hit 65, I’ll think about retiring – think about it,” he said. Meantime, “I still love what I do, I still enjoy dealing with my customers, and I have people who rely on me,” he said.

Soviero said he had negotiated with four developers interested in acquiring his property in recent years, and even entered a deal that didn’t pan out.

But most impressive was the offer from Steve Denholtz, who relocated his company’s headquarters from Matawan to 116 Chestnut Street several years ago before embarking on a buying-and-building spree.

Denholtz’s foremost project to date in town is the Rail, a 57-unit residential building with its own parking garage and 6,000 square feet of retail space on the west side of the North Jersey Coast Line station, between Chestnut and Oakland streets. The project, which abuts Denholtz’s offices, is nearing completion.

The company is also building the 10-unit Southbank condos overlooking the Navesink River from the same downtown block on which it has acquired a handful of other properties, giving rise to speculation about a possible Broad-to-the-river development.

In January, the firm also acquired an office building and a key parking lot at Broad Street and Harding Road.

Soviero said he started talking with Denholtz, an Oceanport resident, about a deal in 2018.

“Steve is a guy who knows what he wants, and he gets it done,” Soviero said. “He has a vision for Red Bank. Some people criticize him because he’s ‘overdeveloping’ and ‘overbuilding.’ But listen, the man knows his business.”

Soviero says he’s all-in on a vision of the train station area being developed as a transit village, with high-density housing anchored by commerce, and sees the Mayo property fitting in.

Soviero started his business in a former filling station at Branch Avenue and Silverside Avenue in Little Silver. He was just months out of high school, having studied auto mechanics at Red Bank Regional, a course of study no longer offered there.

“I put my four children  through college with this business,” said Soviero, a Little Silver resident.

He acquired the Monmouth Street property in 2004, and later added the other sites to his holdings, he said.