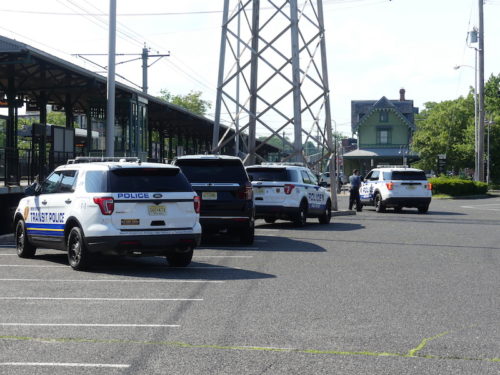 Police on scene at the train station Tuesday.(Photo by John T. Ward. Click to enlarge.)

Police responded to a medical emergency call of a man not breathing at station at around 3:45 p.m., with CPR being performed by a person on the scene.

On arrival, Officers Michael Zadlock and Grace Maggiulli found the man lying unresponsive on the east side train platform, he said. They quickly determined that he was deceased, Frazee said.

Though the cause of death was not immediately known, there were no signs of foul play or trauma to the victim, he said.

The train station and platform remained open during the initial investigation without any delays or disruptions.

Posted on June 1, 2022 at 6:23 am, filed under Featured, Government, Law & Justice, RED BANK, Transportation and tagged death, Gabriel Aparicio-Hernandez, nj, police, red bank, train station. Bookmark the permalink. Follow any comments here with the RSS feed for this post. Trackbacks are closed, but you can post a comment. Email this story.
PREVIOUS: RED BANK: SINKHOLE OPENS ON BROAD NEXT: RED BANK: CHIEF TO ADDRESS SAFETY QS