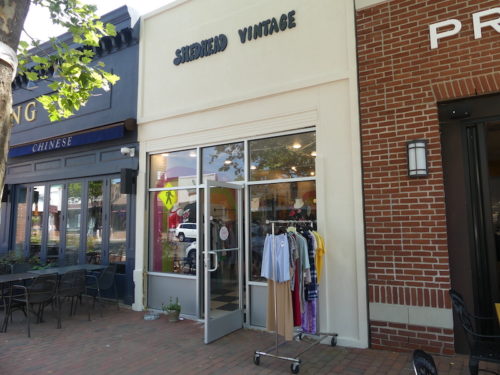 Born in a shed in Matawan, Shedhead Vintage has opened at 93 Broad Street. (Photo by John T. Ward. Click to enlarge)

Say hello to the owners in this midsummer edition of redbankgreen‘s Retail Churn. 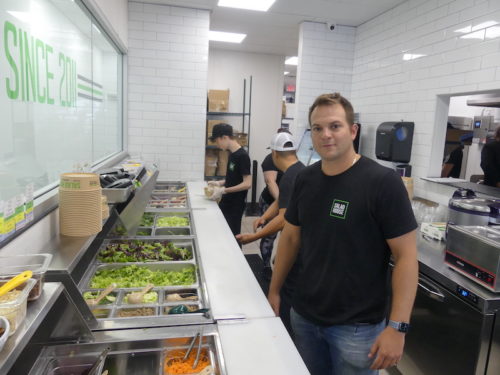 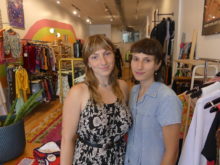 • Shedhead Vintage, offering vintage clothes, shoes and accessories from the 1960s through the 1990s, has opened at 93 Broad Street.

Hallie Endresen, at left in the photo, and Hailey Grillo launched the business online in 2017, when they were juniors at Matawan Regional High School with a shared passion for sustainability.

“We just started thrift-shopping and using the shed behind my house as a warehouse,” said Endresen.

Hence the name of the business, which later set up shop as a brick-and-mortar in Avon-by-the-Sea. But that’s a shore town, and the business needed year-round foot traffic to succeed, the partners concluded.

Red Bank offers that, they said, and even in a relatively small storefront, Shedhead Vintage’s new home is three times the size of the one it had in Avon.

The space was previously occupied by Mike Quon‘s pop-up Quon Art Gallery 93, and before that, Midtown Authentic. 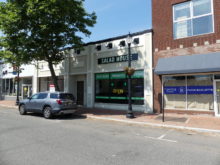 • Phil Kaiser, a partner in and culinary director of the Salad House franchise, has opened the chain’s ninth restaurant, at 130 Broad Street.

This one, which Kaiser owns, aims to leverage a menu of salads, sandwiches, grain bowls and more in a location just steps from Red Bank Catholic High School and downtown offices.

“I love the downtown vibe: lots of gyms, health clubs, a focus on healthy eating,” said Kaiser, 36, who grew up in Manalapan and has worked as a chef at several Manhattan restaurants. 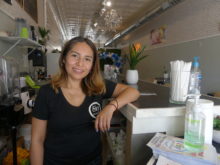 • After several years working as a manicurist, Sara Perez has opened her first business, Sky Nutrition, at 28 Monmouth Street.

The shop offers healthy shakes, energy teas and other treats.

Perez, an immigrant from Mexico now living in Red Bank, takes over the space vacated by Love Me More, a clothing boutique, in early 2021. 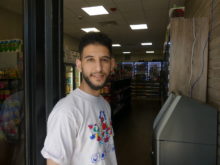 The shop offers a mix of snack foods, beverages, vapes, cigarettes and more.

“There’s no place around here to get a bottle of water that’s not expensive,” said Nagi, an immigrant from Yemen who now resides in New York City.  “It’s like a convenience store, New York style. I feel like this is going to be a great business.”

The space was previously used by an interior design firm. 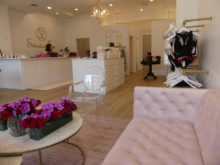 • Not new to town, but in a new home is Sweetest Sin Boutique, the lingerie shop Angie Courtney launched 13 years ago at 11 White Street.

The business has relocated next door to 7 White, a space previously occupied by Chelsea Morning hair salon.

Courtney owns the four-address building, whose other occupants are Semolina Restaurant and Red Bank Chocolate Shoppe. Semolina plans to open a pasta shop in the space vacated by Sweetest Sin, according to window signage.