The vacant onetime home of Big Man’s West and the office building at left would be razed to make way for the development, shown in the illustration below. (Photo by John T. Ward. Rendering by SOME Architects. Click to enlarge.)

A plan for 45 apartments on the Red Bank site of a nightclub once owned by saxophonist Clarence Clemons won borough variances to proceed Thursday night. 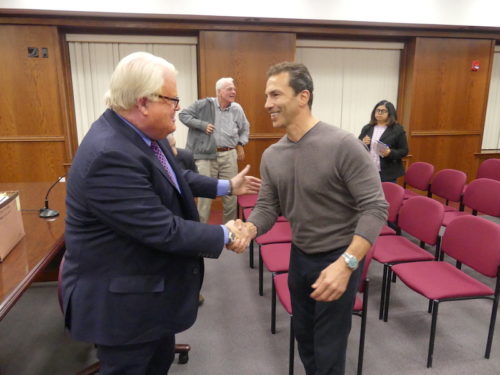 Developer Michael Salerno, above right, with his attorney, former mayor Ed McKenna after the meeting. Below, zoning board members Eileen Hogan, center, and Anne Torre. (Photo by John T. Ward. Click to enlarge. Rendering by SOME Architects. Click to enlarge.) 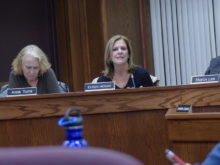 The plan calls for a four-story building encompassing the sites of an existing office building at 121 Monmouth Street, as well as the former Big Man’s West, both of which would be demolished.

Included in the project, which also has frontage on Pearl and Oakland streets, is an existing house that would provide one of the project’s three affordable units. The project would also provide 2,000 square feet of street-level retail and office space.

The most consistent objections to the plan, and the only ones raised at the end, came from the owners of the Station Place apartments,  just two doors west, at Monmouth and West streets.

Lee Klein, a traffic expert hired by Station Place, testified that Salerno’s project was 40 parking spaces short of borough requirements. In addition, he said, “there would be little or no on-street parking” available when the Count Basie Center for the Arts, just yards away, draws crowds.

In response, former mayor Ed McKennna, Salerno’s attorney, noted that Klein’s study consisted of one night’s parking counts, but did not factor in the availability of spaces in the White Street municipal lot and elsewhere for theater-goers.

“I don’t want to waste your time,” McKenna told the board, after briefly cross-examining Klein. Station Place, he said, had received “ten times the variances” sought by Salerno, whose parking variance requested was “not substantial.”

Board member Sean Murphy, presiding over the meeting in lieu of acting member Raymond  Mass, who participated by phone, moved the approval.

“This area, to put it bluntly, has looked like crap for a while,” Murphy said. “If somebody wanted to do something smaller, they would have done it. It’s been a sore on Red Bank, on Monmouth Street.”

Murphy said Salerno had made “dramatic changes” to the original plan, including the reduction of the proposed number of units and reducing the height by one story.

In addition, he said, the project would complement a 32-unit project that got underway this week directly across Monmouth Street, at number 120, and help enhance the corridor between Maple Avenue and Shrewsbury Avenue.

Like Salerno’s, the project at 120 Monmouth Street is also to be four stories tall and provide tenant parking beneath the living units.

“I’m having a hard time seeing the downside to this,” Murphy said.

Member Eileen Hogan, however, said she was of two minds.

“I struggle, as I always do, with the density and the parking,” as well as the lack of setbacks from the sidewalk, she said. “But I do like the project. That area needs something, it truly, truly does. Something needs to go there.”

Member Vincent Light said he, too, was “a little concerned about density, but not as concerned about the parking,” because he expects tenants at the address to own fewer cars.

He was particularly pleased, he said, that Salerno took the board’s suggestion and committed to incorporate the existing house as an affordable unit.

Salerno said he did not yet have an estimated completion date.

The project was the second major development approval in two weeks. On October 20, the zoning board granted setback and other variances to allow One Globe Court, a four-story, 40-unit apartment building on the northwest corner of Mechanic Street, now the site of a one-story office and retail structure.

To be built by by developer Mazin ‘Patrick’ Kalian, the structure also has at-grade parking underneath the apartments, as does The Forum, a four-story, 24-unit apartment building Kalian completed in 2021 directly across Mechanic Street.