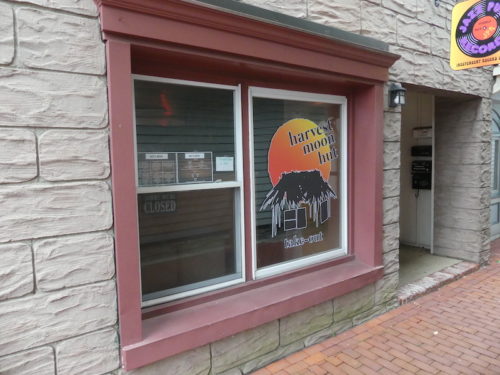 Harvest Moon Hut has opened in the alley alongside the Dublin House Pub. (Photo by John T. Ward. Click to enlarge)

A tiny new restaurant stakes out night owls. A vegan ice cream shop, a pizzeria, a French-bread baker and a dance studio waltz enticingly toward openings. Another restaurant closes its doors.

Read all about downtown Red Bank’s latest comings-and-goings in this edition of redbankgreen‘s Retail Churn. 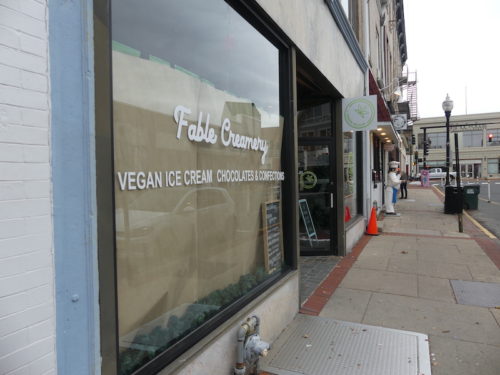 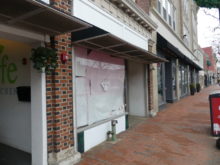 • A Red Bank couple has opened Harvest Moon Hut, at 30 Monmouth Street, in the quaint alleyway of shops next to the Dublin House Pub.

The 175-square-foot space was recently vacated by Soul Sandwich.

A menu in the window advertises an eclectic mix of munchies-killers: banh mi, empanadas, burgers and “country fried sandwiches.”

Who’s behind it? Lisa Atenco and her husband, Silvano, who each have two decades or more of experience in the food industry, Lisa tells Churn. They’ll be getting assists from one of their four children.

The takeout-only menu, she says, reflects “our favorite type of sandwiches.” It also includes soups, hot dogs and “a few baked goods,” such as muffins and cookies.

And “anything we have on the menu, we also have the equivalent vegan option,” she says.

Here’s the nightcrawler angle: Harvest Moon Hut will be open as late as 2:30 a.m. for Friday- and Saturday-nigh carousers, and until 1 a.m. “for our industry people” working Sunday-night shifts, Lisa says.

“Leaving work late, with no place being open for food, was always a complaint we had,” she adds.

• Fable Creamery, an ice cream shop that will make its own plant-based and dairy-free confections, is planning to open at 14 Monmouth Street, in the space last occupied by the Cheese Cave.

Michelle Storey, of Holmdel, tells Churn that her business, featuring a “dedicated vegan and gluten-free kitchen,” is the only “100-percent vegan ice cream shop” she’s been able to identify in New Jersey.

Offerings will include a variety of ice creams, artisan chocolates, and treats such as toffees, pralines and cookies, Storey says.

She’s planning to open the shop before Christmas.

• A year after Olympus Greek American Grill replaced the short-lived Rice Box at 21 Monmouth Street, the restaurant windows are again papered over.

Google lists the business as “permanently closed,” and the restaurant’s Facebook page has been deactivated.

• Coming soon, by appearances: Sally Boy’s, a pizza-and-other-offerings shop at 1 Broad Street, and Paris Baguette, a national-brand bakery, at 130 Broad.

Both have been under construction for months. Sally Boy’s appears to be closer to opening of the two.

• Arthur Murray Dance Studio is relocating to 58 Broad Street, a heart-of-downtown storefront that’s been vacant since Lacrosse Unlimited relocated to 68 Broad in early 2021.

Owned by husband-and-wife dancers Linas and Catherine Koreiva, the dance instruction studio opened six years ago at 140-148 Broad Street. That building, at the corner of Reckless Place, is now being vacated for major renovations by new owner Denholtz Properties.