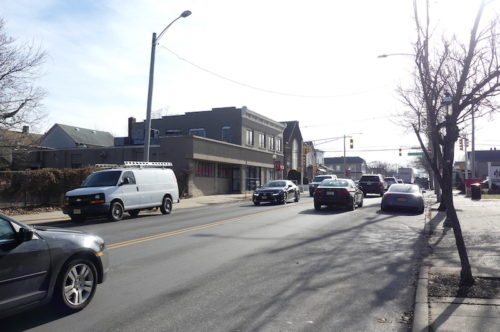 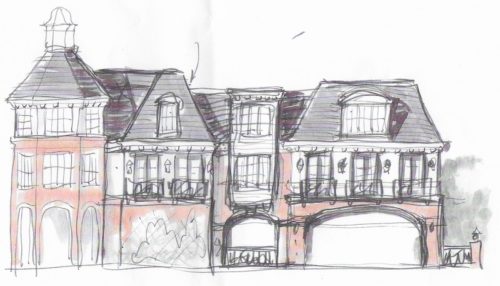 A sketch of the Drs. Parker side of the proposed building showing the parking entrance at right. (Rendering by Michael James Monroe Architect. Click to enlarge.)

Representatives of the developer, American Real Estate Opportunity Fund LLC, stated from the outset of the board session that they were looking for feedback and willing to modify the plan for the northeast corner of Drs. James Parker Boulevard and Shrewsbury Avenue.

The fund, owned by Warren Diamond of Rumson and Grace Geritano of Staten Island, had proposed razing a two-story commercial building at 273 Shrewsbury Avenue and small house next door on Parker Boulevard. They would be replaced by  a three-story structure with 16 apartments, 3,000 square feet of street-level retail space and underground parking for tenants.

The project would consolidate five lots into one. Attorney Robert McGowan told the board that under zoning rules, it appeared that the site could be developed as four separate buildings with 16 apartments and 8,000 square feet of retail.

Board Engineer Ed Herrman of T&M Associates asked the applicant to supply sketches showing that layout “so we can have that conversation and understand the trade-offs” versus the proposed plan.

While the proposal showed vehicle access to the site via a driveway on Parker Boulevard, with right-turn-in and right-turn-out restrictions, local residents and at least one board member found that part of the plan troubling.

Several neighbors noted that an annual community block party that closes Parker Boulevard between Shrewsbury and Bridge avenues would conflict with tenant access to the building.

“If the feeling is the driveway should be off Shrewsbury Avenue, we can move the driveway,” said architect Michael James Monroe. He and others noted, though, that Shrewsbury Avenue is under jurisdiction of Monmouth County, which is unlikely to approve multiple curb cuts along that side.

Board member Stephanie Albanese called the nearby intersection of Parker and Bridge “a nightmare, and said that “adding something more to that pretty small area is of great concern.”

Mostly, though, the project would just be too much for the location, commenters said.

“It’s entirely too much traffic,” said board member and former councilwoman Sharon Lee. “I think you should really rethink this and come back with something smaller.”

After a break in the hearing, Monroe told the board that the developer’s professionals would meet with neighbors to obtain additional feedback that might be incorporated into a revised plan.

“I’m hoping that when you come back, we can meet in the middle, because something’s going to get built there,” said board member Sean Murphy.

The fund acquired the properties in late 2018 for $1.27 million, according to Monmouth County records.