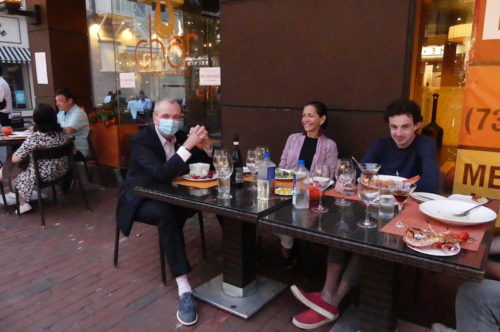 Governor Phil Murphy took an understanding tone Monday, less than 24 hours after he and his family were harangued by foulmouthed passersby while eating dinner in Red Bank.

Asking critics to “leave my family out of this,” Murphy also used the verbal assault as an indication that New Jerseyans need to seek common ground during “an incredibly stressful time.”

Video of the encounter by an unknown person. (Click to enlarge.)

The encounter, recorded on a  36-second video and shared on social media, captured two unseen women calling Murphy a “dick” and dropping f-bombs while he, First Lady Tammy Murphy and their three teens ate at an outdoor restaurant.

Tucking into his mashed potatoes, Murphy did not engage the hecklers. When asked by an unseen person to put on a mask, one of the women replied, “You know why I don’t need a mask? Because there ain’t nothing fucking wrong with me.”

At his thrice-weekly briefing on the COVID-19 pandemic Monday, Murphy said the incident occurred in Red Bank, but did not specify the restaurant.

Murphy and his family, who live on the Navesink River in Middletown, frequently dine in Red Bank, and the video appeared to show them at Char Steakhouse on Broad Street, one of their favorites.

“We were dining outdoors and I was eating my food, which is why I didn’t have my mask on,” he said.

“I don’t condone out-of-bounds behavior, but I’m a big boy, and I think I speak for my wife, but let’s leave my family out of this, number one,” he said. “But number two, let’s all keep each other in our prayers right now, because this is an extraordinarily stressful period that we’re in.

“This is exactly not the time to be going after each other,” he said. “The stress levels are overwhelming. I get it. We all live it. You’re out of a job, you’re out of work. Your business is bust. You’ve lost somebody. Who the heck could blame  you for being stressed? But let’s try not to let all that divide us even further. Let’s try to find common ground.”

Murphy said he had received support from Republican legislators about the incident, and “that’s Jersey on our best days.”

Among those stepping up was 13th-district Republican state Senator Declan O’Scanlon of Little Silver.

“This is totally out of line&out of bounds,” O’Scanlon wrote on Twitter. “Criticizing policy, heated debate -in the public arena – is all ok. But harassment of anyone while w/family, on private time is not acceptable. We’re all sick &tired of this mess. @GovMurphy too, trust me..let’s cut each other some slack.”