At its final session of 2020, the council also extended the employment of Theresa Casagrande as borough administrator and bid goodbye to Councilwoman Susan Sorensen. 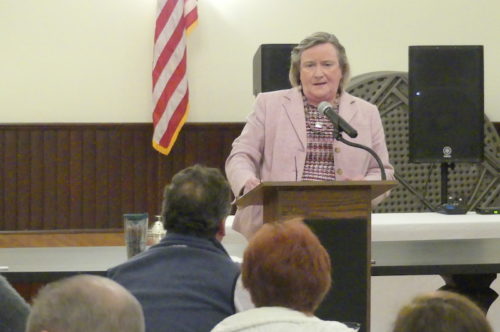 Theresa Casagrande, seen speaking at a borough event in early March, is about to begin her second decade as borough administrator. (Photo by John T. Ward. Click to enlarge)

During a meeting conducted via Zoom, the council approved an ordinance authorizing the issuance of $7.6 in debt to cover the anticipated costs of new borough facilities at the police station, on Fisk Street, and public works yard, on Allen Street.

Council members Meghan Chrisner-Keefe and Betsy Koch voted no on the measure, which was supported by Sorensen, Chris Rodriguez, Jim Banahan and Mike McCue.

“This is not a small bond,” Chrisner-Keefe said. “We took out a sizable bond last year. Who knows what’s ahead? I’m not against bonding, especially for capital needs. But I have concerns about the timing.”

Chrisner-Keefe also questioned why the costs of improving access to handicap access to Bicentennial Hall was included in the bond.

“The underlying purpose of addressing deficiencies there are, I believe, important,” she said. “Whether now is the time, I’m not sure.”

But advocates for the financing measure cited a need for funds to continue covering “soft costs” now being incurred in the form of architectural and engineering plans, as well as advantageous interest rates.

In light of low interest rates, “to not lock in now is a major mistake,” said Banahan.
“Yeah, we can do it next year, but I’d turn the question around: what’s the value in waiting?” Rodriguez said. “I am tired of waiting, and I don’t see reasons to wait at all. All we’re doing is creating optionality for a future council.”
While no issuance of debt is yet planned, Mayor Ben Lucarelli said the authorization is needed “so we can proceed with the work,” adding that delay would expose the borough to the risk of  higher interest rates and construction inflation, he said.
“I don’t believe you have a valid argument” not to proceed, Lucarelli told Chrisner-Keefe.

“This past year has been quite unprecedented, and in typical fashion, Theresa has risen to the challenge of everything COVID-related,” said Chrisner-Keefe, who serves the council liaison on personnel.

With the agreement, Casagrande begins her second decade in the post. She succeeded Mary Howell as administrator in February, 2011.

• Bid goodbye to Sorensen, who failed in her bid for a fourth term in November’s election.

Lucarelli read a proclamation from the council that noted Sorensen’s extensive involvement in volunteer efforts, as well as her efforts spearheading improved borough communications with residents.

“On a personal note, I can say in my 35 years of serving on charity boards, and my over a decade of serving the borough in public service, I have yet to see a more energetic, prolific and productive volunteer,” Lucarelli told Sorensen. “You are truly a remarkable individual and  you should take great pride in all your accomplishments.”

“The residents of Fair Haven were very lucky to have you,” she told Sorensen, “and I’m sure Ben and the council won’t let you go very far.”

Sorensen said it had been her pleasure to serve, “and I’ve enjoyed almost every minute of it.”

A Republican, Sorensen lost to incumbent Rodriguez, who won a second term, and his running mate, Laline Neff. They’ll  join incumbent Democrats Chrisner-Keefe and McCue on the dais to give their party a majority on the borough council for the first time in memory.

Neff and Rodriguez are scheduled to be sworn into office at the borough government reorganization meeting, scheduled for Monday, January 4, at 7 p.m. Because of the COVID-19 pandemic, the event will be conducted via Zoom and telephone.