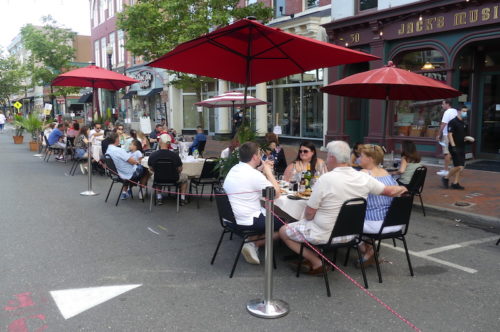 Visitors dining on (and in) Broad Street in June. (Photo by John T. Ward. Click to enlarge.)

An effort to spark downtown business activity as the pandemic nears its second year is among the items on the Red Bank council’s agenda for Wednesday night.

The in-street shopping and dining plaza known as ‘Broadwalk,’ which allowed in-street placement of restaurant tables, went on winter hiatus in November, five months after it was launched.

“We think it was a success for the town,” Councilman President Hazim Yassin said at last week’s council workshop session, “and we’d like to see it repeated this year.”

He asked that the council approve a resolution to reconvene last year’s Broadwalk committee “so we can start getting concept plans together… not only to improve the Broadwalk but maybe to expand it.”

The 2020 version initially called for alternating closures of portions of Monmouth and Broad streets. The Monmouth Street piece was ended after it failed to attract visitors.

The Broad Street closure to vehicle traffic, however, drew large numbers of diners to restaurants on northern Broad, Wallace, White and Front streets  throughout the summer and autumn, and was extended from part-time to 24/7.

• An ordinance to ban future planting of bamboo and other invasive species, while allowing already-planted specimens to remain.

• An ordinance change designating all Environmental Commission members also as members of its Green Team subcommittee, which focuses on the Sustainable Jersey Municipal Certification Program.