The project, with a mid-building garage entry and exit on Shrewsbury Avenue, would replace the two-story building shown below. (Rendering by Michael James Monroe Architect. Photo by John T. Ward. Click to enlarge.)

A revised proposal for stores and apartments at a busy Red Bank intersection may get a hearing next week.

The plan, for the northeast corner of Shrewsbury Avenue and Drs. James Parker Boulevard, is significantly scaled back from its original form, filed in October, 2019. 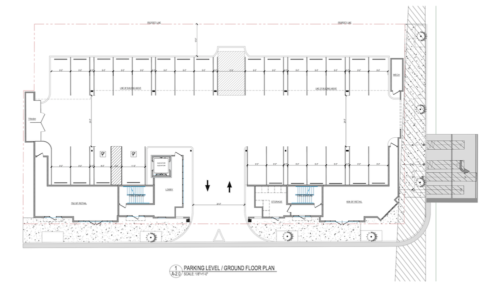 The plan for the ground floor parking at the proposed project. (Rendering by Michael James Monroe. Click to enlarge.)

Scheduled to be heard by the zoning board is a proposal by American Real Estate Opportunity Fund  LLC. As originally proposed, the project would replace a two-story, 3,600-square-foot office and retail building and a house on Drs. Parker, and consolidate five lots into one.

The original proposal for 16 apartments and 3,000 square feet of retail was sent back to the drawing board after one hearing in January, 2020, when neighbors and zoning board members declared it too big.

A revised plan shows it has been scaled back to 10 apartments, with the retail footprint has been cut in half, to 1,400 square feet.

In addition, parking that was to have been partially underground is now proposed at-grade, beneath two stories of apartments. Vehicle access would be through a mid-building passageway on Shrewsbury Avenue.

No parking variance is required, as the plan calls for 26 off-street spots, the same number required, according to the application.

Tenants would have use of a rooftop terrace, according to plans.

According to disclosures at the first hearing, American Real Estate Opportunity Fund is owned by Warren Diamond, a Rumson resident who’s also the CEO of American Self Storage, based in Tinton Falls, and Grace Geritano of Staten Island. The fund acquired the properties in late 2018 for $1.27 million, according to Monmouth County records.

The proposal is the second major apartments-and-shops plan for Shrewsbury Avenue to come before Red Bank officials this month. Just a week ago, the planning board began hearing a proposal by developer Roger Mumford for a four-story building with 23 apartments above retail at the southwest corner of River Street.

Whether the zoning board will get to the latest application Thursday night remains to be seen: it’s at the end of a long agenda that also includes these applications:

• Jim Whelan is seeking a variance needed in rebuilding a Washington Street house heavily damaged by fire in May 27, 2018.

The plan was scrutinized by the Historic Preservation Commission, an advisory body, which gave it unanimous approval in November.

• Melissa and Stephen Houck return for continuation of a hearing begun in January on their request to build a new house in the front yard of one they co-own with Stephen’s mother, Lonnie Gordon, on Locust Avenue.

• Denholtz Associates is seeking a technical amendment to its plan for 10 townhouses overlooking the Navesink River from Boat Club.

The yet-to-be construct project, dubbed Southbank, was approved by the board in April, 2019.

The zoning board meets at 6:30 p.m. Here’s the full agenda, with links to additional documents, and here’s how to listen in and participate.