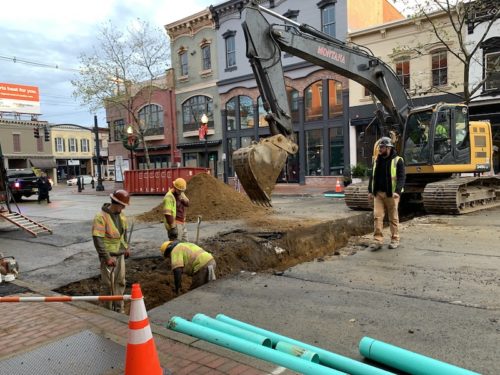 As many as 100 property owners in downtown Red Bank may be in for a shock: thousands of dollars in costs to replace leaking water-supply lines, officials said Wednesday night.

An unstated number of leaking or near-failure service lines have been identified beneath upper Broad Street during digging to replace the sewer main, consulting engineer Laura Neumann, of CME Associates, told the council during its workshop session.

A week ago, the project contractor, Montana Construction, “put us on notice that they’re concerned about” the condition of the lines, or laterals, based on digging so far between Front and Mechanic streets, Neumann said.

“A lot of them are very aged, and they’re galvanized pipe,” she said. “So as they are digging, and honestly, they are digging by hand, but just by virtue of the dirt moving, some of these are now leaking.”

The leaks and potential leaks must be addressed now to head off future problems, Neumann said. She anticipated 65 to 70 properties have leaking lines, though the number could be as many as 100, she said.

The owners of all properties along the length of the project, from Front Street to Harding Road, had been advised in advance of digging to replace their laterals, if needed, while a trench was open for the project, said acting borough administrator and police Chief Darren McConnell.

McConnell told redbankgreen in October that property owners were encouraged, in notices sent to them via Red Bank RiverCenter, to replace their service connections “if it is still galvanized pipe, if it is old, or if they are experiencing less than adequate pressure.” But none responded, he said Wednesday, during the meeting conducted via Zoom.

The question for the council, Neumann said, was what to do next.

One option, she said, would be “to replace the water main in its entirety” and make the connection upgrades a borough project, she said. That could result in delays, she said, as “this isn’t a water main project,” and bonding was for the sewer and streetscape.

The town could also replace the laterals at its own expense, but that’s “sort of contradictory to our ordinance,” which makes property owners responsible for the connections between the main and their buildings, she said.

Doing the work and billing property owners, which she advised, would require a decision as to how soon the town gets reimbursed: over the course of a year, as is current practice, or “maybe giving the owners a little more time” by extending the payback schedule to two or three years, she said.

“It’s a cost that an owner wasn’t anticipating,” Neumann said.

“If a property owner isn’t prepared for that expense, I think it’s important that we make some sort of arrangements for them to pay it off over time,” said Councilman Ed Zipprich, a suggestion backed by Councilman Erik Yngstrom.

Mayor Pasquale Menna said he favored extending the payback terms “because those are high numbers for the average customer.”

No property owners or business representatives spoke during the meeting. Zipprich said he’d like to hear from them before a decision is made.

Replacing the sewer line, which is undersized relative to demand, is a driving factor behind the $2.69 million project, officials have said.

The cost also includes surface improvements, including a streetscape makeover at the north end, in the heart of the business district. There, traffic-calming bumpouts, new benches, trash receptacles and planters are planned.

The project would be capped with the installation of retractable hydraulic bollards at three intersections to allow for street closures, such as the Broadwalk promenade created to spur business during the COVID-19 pandemic.