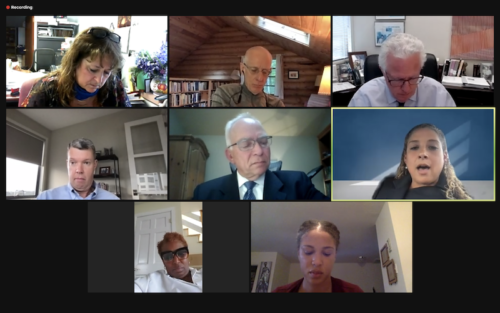 A screengrab from the Redevelopment Agency’s last meeting, in September. (Photo from Zoom. Click to enlarge)

Two months into office, Red Bank Councilwoman Jacqueline Sturdivant may get to check off another of her campaign promises this week: disbanding the borough Redevelopment Agency.

A resolution to begin dissolving the agency is on the council’s meeting agenda for Wednesday night.

The Redevelopment Agency was created in February, 2019, to assess the borough government’s facilities and future needs, and to work with any private developers who might propose large-scale projects.

No private projects have come forward, but the agency recommended a $9.3 million upgrade and expansion of the public works yard on Chestnut Street.

The agency has also “identified potential locations” for new borough facilities, executive director Cherron Rountree said in a presentation at the borough library in December.

Sturdivant, though, has said the “purpose of the agency and its ability to deliver are questionable,” and has cost taxpayers some $439,000.

The agency has met only once since July, and ended 2021 without having set a meeting schedule for 2022. Sturdivant got little pushback when she formally proposed the disbanding in January.

Earlier this month, Sturdivant saw her promise to curtail the power of the town’s top unelected official, the business administrator, restored to pre-2018 settings. The 3-2 vote reflected a shift in power on the all-Democratic governing body, to a faction led by Councilman Ed Zipprich, an advantage that appears to have since been bolstered by the addition of Angela Mirandi to fill a vacancy.

Here’s the full agenda for Wednesday’s meeting, which is scheduled to be conducted via Zoom beginning at 6:30 p.m. Access and participation details can be found here.