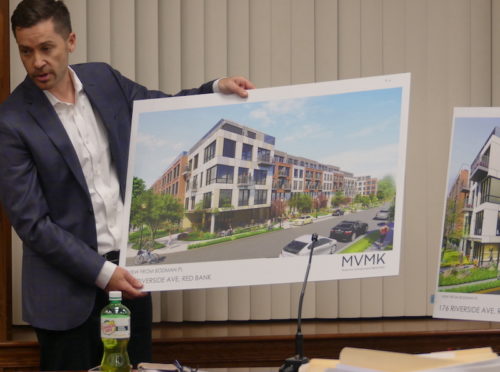 Architect Adrian Melji with a rendering of the revised project’s Bodman Place side looking northwest from Riverside Avenue. (Photo by John T. Ward. Click to enlarge.) 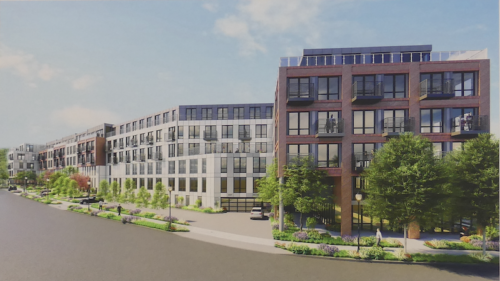 A rendering of the project looking south along Bodman Place from the area of the Oyster Point Hotel. (Image by MVMK. Click to enlarge.)

Having negotiated a deal over a parking lot belonging to the Colony House Apartments on Bodman Place, the Saxum project will now offer “more of everything,” architect Adrian Melji told the board.

Under the revised plan, what would have been a central carve-out for the Colony House lot will now be filled with larger apartments that conceal parking. Colony House tenants will have dedicated use of 60 parking spaces, up from the three dozen now available in the surface lot acquired by Saxum, a planner told the board.

The changes come 28 months after Saxum, based in Summit, obtained its original approval following a negotiated deal that involved the Fair Share Housing Center to help the borough ward off a lawsuit over affordable housing access.

Construction, however, has yet to begin.

The 2.7-acre site is primarily the former Visiting Nurse Association headquarters at at 176 Riverside Avenue, alongside the Route 35 Cooper’s Bridge approach.

• A dog run has been moved from roof to the ground at the northwest corner of property.

The changes reduce the density of the project from 88 units per acre to 77.5.

Filling the horseshoe void allows for “a continuous facade” along Bodman Place without the interruption of a parking lot that was to have been surrounded by windowless walls, said Melji.

It also enabled the developer to relocate a public plaza that had been a sticking point in the 2019 hearings, he said.

Instead of being located at the corner of Bodman and Riverside, where objectors feared for the safety of pedestrians, the plaza will now be midway along the length of the building on Bodman.

“That alone was an amazing move,” board member Barbara Boas said in explaining her vote.

Under its 2019 approval, Saxum was obliged to join the borough in seeking New Jersey Department of Transportation for a traffic signal at Bodman and Riverside, a notoriously difficult intersection for motorists leaving Bodman, and to contribute to its cost.

Saxum’s traffic engineer, John McCormack, told the board that while the DOT has in the past objected that a new signal would disrupt traffic flows along Riverside, he’s confident the agency can be persuaded.

“The spacing [between lights] is so tight that it works, that it could be one signal,” he said. “Let’s stop thinking of it as two signals.”

The vote to approve was unanimous, with Mayor Pasquale Menna heaping praise on the changes. Regarding the outdoor plaza, he said, “they’ve removed that, they listened to us.”

Lou DiMento, the only board member to vote against the project in 2019, said he was now voting in favor because “this is a little better.”

Last October, the planning board rejected Saxum’s request for an “Area in Need of Redevelopment” designation under New Jersey law.