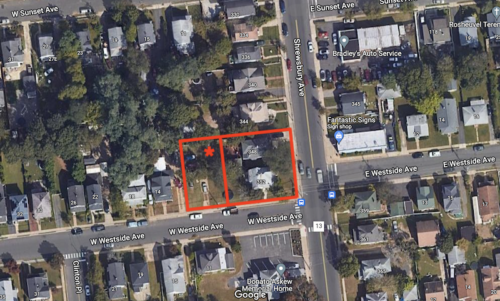 The owner of two adjoining Red Bank properties won the right to build a third house behind them Monday night. 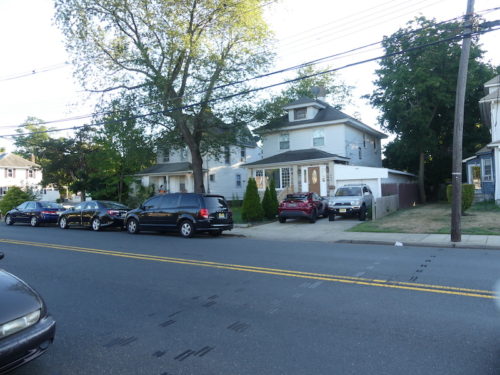 The new lot, indicated by a star in the aerial photo, would be created from portions of the backyards of 348 and 352 Shrewsbury Avenue, above.

Riyazali Hassam, a dentist with a practice on Maple Avenue, had proposed turning two lots at 348 and 352 Shrewsbury Avenue into three, one each for the existing dwellings and one for future home construction.

Hassam bought the lots in 2015 and 2021, Monmouth County records show.

Taking a portion of the rear yards of the existing homes, the change would produce a new 50-by-100-foot lot on West Westside Avenue, Andrew Stockton, a planner hired by Hassam, told the planning board.

The existing lots would then measure 50 by 112, with setbacks conforming to zone requirements, he said.

Board member and former councilwoman Juanita Lewis, whose Shrewsbury Avenue home abuts the site, recused herself from voting on the matter. From the audience, she raised concerns about flooding at the corner when it rains. Monmouth County, which owns Shrewsbury Avenue, has failed to correct the issue, she said.

“When there’s a heavy rain, there’s a pond there,” she said.

The board voted unanimously to approve the plan, on the condition that Hassam install a drywell to prevent runoff onto neighboring properties and street.

Plans for home construction would also require approval by the borough.

Separately, Hassam has proposed splitting 15 Tilton Avenue, between Catherine and River streets, into two lots, to create a new buildable one. That request is scheduled to be heard by the zoning board January 19.

Hassam acquired that property in 2020.