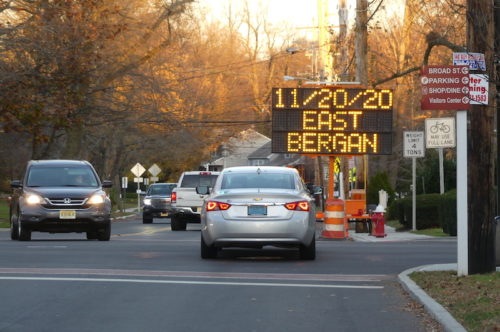 Yes, the flashing sign shown above has a typo. But starting Friday, the eastbound lane of East Bergen Place from Broad Street to South Street in Red Bank will be closed for utility work, the borough announced Wednesday.

END_OF_DOCUMENT_TOKEN_TO_BE_REPLACED As regular commuters on Branch Avenue in Red Bank may have discovered, the road was closed to traffic Thursday morning.

END_OF_DOCUMENT_TOKEN_TO_BE_REPLACED Motorists traveling through Red Bank faced three road closures, including a stretch of Bridge Avenue, above, and another on River Road, at right.

What’s Going on Here? Read on. (Photos by Trish Russoniello. Click to enlarge.)

END_OF_DOCUMENT_TOKEN_TO_BE_REPLACED