FAIR HAVEN: NO DUNKIN’ ON OVER EASY 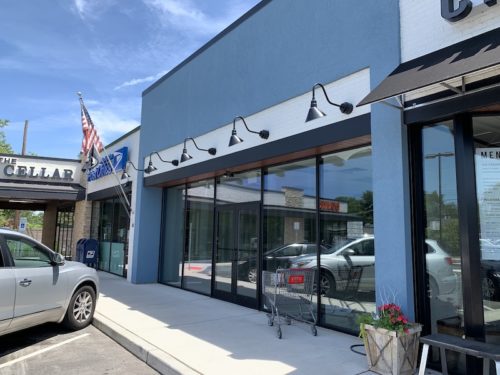 Over Easy Kitchen plans to open in space vacated by Bike Haven nearly four years ago. (Click to enlarge.)

No angry crowds, no predictions of traffic jams or children being run over by cars.

A restaurant proposed for Fair Haven’s Acme shopping center had a far easier time winning approval Tuesday night than its prospective neighbor, a Dunkin’ coffee shop that divided the town for months. 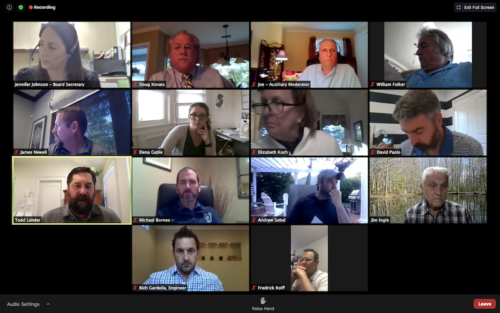 Board chairman Todd Lehder, highlighted in yellow, had questions about parking and rear access during the meeting, conducted via Zoom. (Zoom screengrab. Click to enlarge.)

Over Easy Kitchen would fill the 2,500-square-foot retail space left vacant since the departure of Bike Haven almost four years ago. The space is flanked by the borough post office and Nicholas Creamery, an ice cream shop.

The 64-seat restaurant would be the third for owner Frank Brusco, who has restaurants under the same name in Holmdel and Marlboro, he testified.

The sit-down restaurant serves breakfast, brunch and lunch, he said, with little takeout business and no grab-and-go coffee service.

The reception for Brusco’s proposal marked a sharp contrast with the one that greeted Dominic Sequeira in his quest to open a Dunkin’ shop two doors away in the center. Those hearings, in 2018 and 2019, had to be held in a school gym to accommodate large turnout, and prompted complaints about traffic and road safety.

Sequeira’s plan, which won planning board approval last August, also triggered heated debate on a Facebook page about its purported impact on the quaint character of the borough.

By contrast, forty minutes into the Over Easy hearing, held online, only three members of the public were tuned in, and one of them was this reporter, board secretary Jennifer Johnson told redbankgreen.

The owner failed to show how the change “does not adversely affect” a 2017 site plan approval for the property regarding traffic circulation, parking and other considerations, Poruchynsky wrote in his initial denial.

Much of the one-hour, forty-five minute hearing was spent on two issues. One was whether the restaurant would require the shopping center to provide more parking than its current 249 spaces.

The center’s parking expert, Karl Pehnke, cited a study of actual use of the site’s lot showed multiple types of businesses “sharing the same infrastructure and using those spaces at different times of day,” just like shopping centers across America.

The center is “not getting anywhere close to not having enough parking” with the restaurant added, said Pehnke, who also testified in the Dunkin’ hearings.

Board Chairman Todd Lehder also repeatedly raised questions about how to prevent customers from using the back door, which is adjacent to some of that parking.

“We might have one or two locals who want to sneak in,” said board member Michael Borneo, “but it’s a solid metal door that’s not very inviting.”

Referring to the Cellar, located two doors away, Borneo said, “I’ve never thought once to go in the back door of the liquor store.”

No members of the public weighed in, pro or con.

“I think we’ve done a lot of analysis that shows this parking lot is safe,” said Andrew Sobel, who made the motion to approve the project.

Brusco told the board he expects to open within four months.