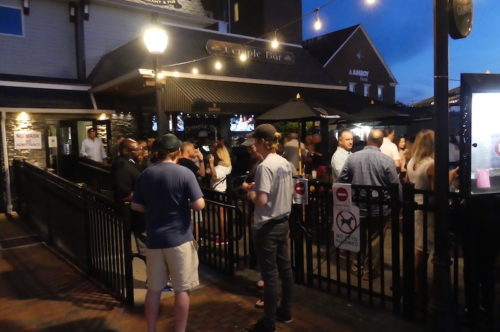 Patrons of the Dublin House in Red Bank gather at its outdoor Temple Bar on June 20. (Photo by John T. Ward. Click to enlarge.)

The move is “prudent” in the face of rising COVID-19 infection rates in other states, Murphy said at his daily briefing on the pandemic.

He also cited “overcrowding, a complete disregard for social distancing, [and] very few if any face coverings” at some New Jersey bars that he did not name. 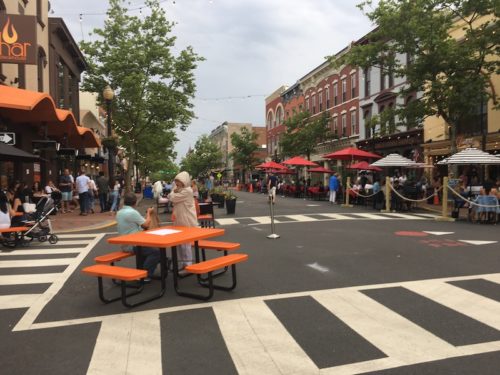 Restaurants have been allowed to expand into a part-time pedestrian plaza on Broad Street for the past two weeks while awaiting a return of indoor service. (Photo by John T. Ward. Click to enlarge.)

“The carelessness of one establishment can completely undo the good work of many,” Murphy said. “We will not tolerate outlier bars and restaurants and, frankly, patrons who think the rules don’t apply to them.”

Restaurants were to have been allowed to serve customers indoors starting Thursday, as long as no more than 25 percent of seats were occupied at a time.

But while the number of New Jersey deaths and hospitalizations related to COVID-19 continue to decline, “we have to learn from our sister states, which are now battling for their lives,” Murphy said. “We were there not that long ago. None of us, none of us want to go back through that hell.”

In response to a reporter’s question, Murphy said he is “absolutely’ concerned about the viability of the hospitality industry, but “I have a bigger concern about people getting sick inside establishments, reigniting a wave, and then devastating both those establishments as well as our economy.”

Chief Darren McConnell told redbankgreen late Friday that while his department had seen “some non-compliance issues, mostly minor” since bars were allowed to open outdoors earlier this month, no summonses had been issued.

Instead, he said, “essentially all” bars and restaurants in town had been contacted by his department, code enforcement or Red Bank RiverCenter and advised to “be more vigilant and careful” about measures to inhibit transmission of the virus.

“The six-foot spacing of tables and patrons is our primary concern,” McConnell said. “When social distancing is difficult to maintain masks must be worn; otherwise they are encouraged,”

He said he was hoping to avoid summonses by getting “voluntary compliance.”

Among those contacted by police was Dublin House Pub owner Eugene Devlin, who spoke with redbankgreen Friday afternoon as he told arriving customers that they had to wear face coverings, and offered free ones to those who didn’t bring their own.

His employees, Devlin said, were being “very diligent,” wearing masks and gloves, and he’d assigned one to remind customers to remain six feet apart and keep their faces covered when not eating or drinking.

Still, Devlin said he objected to the restrictions.

“What’s the difference in seating and standing?” Devlin said. “If you’re sitting beside somebody, it’s the same as standing beside them.

“And what about Home Depot? They’re lined up to get in there. They’re not social distancing,” he said.

At his bar, “people are willing to mingle, and the cops are telling me they can’t. If these people want to mingle, it’s a free country, you’ve got to let them mingle.”

• Murphy said there was no change to the plan to allow outdoor graduation ceremonies of up to 500 attendees starting July 6. But no one who has traveled to a COVID-19 “hot spot” should participate or attend those events, he said.

• Separately, Monmouth County officials reported Monday that 712 deaths have now been confirmed among residents, since the crisis began in March, with 9,249 resident cases.

Here’s the case count by town: