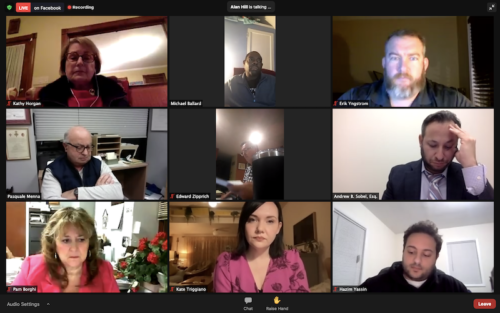 Councilwoman Kate Triggiano, center of bottom row, prevailed on a resolution regarding the Redevelopment Agency. (Zoom screengrab. Click to enlarge.)

Sarcasm and insults flew Wednesday night as the Red Bank council yet again clashed over the future of the mothballed Senior Center.

This time, residents provided much of the ire. Ziad Shehady, left, with Ken DeRoberts, now a consultant to the Redevelopment Agency, at the Mayor’s Ball in 2018. (Photo by John T. Ward. Click to enlarge.)

Dominating the session was debate over a proposed resolution “directing the Redevelopment Agency to emphasize riverfront public access and uses” of borough properties “and to provide alternative or continued public use analyses for any recommended sale or transfer of public property.”

The council formed the agency in 2019 in part to review all municipal facilities, some of which are considered inadequate, and make recommendations about their longterm futures.

The resolution was offered by Councilwoman Kate Triggiano, who said its aim was to give the agency “some healthy information about what we expect as a governing body.”

The directives include, according to the document, placing “significant emphasis on public use of and/or access to riverfront properties” and, “in any recommendations to the Mayor & Council that may include proposals to sell or transfer public land, an analysis of the social and community factors, together with the economic or market factors, favoring and disfavoring such proposed sale or transfer.”

The resolution, first described at last week’s workshop session and added to Wednesday’s agenda hours before the vote, won council approval by a 4-2 vote. As in a number of instances over the past year, the all-Democratic council split had ‘no’ votes by members Michael Ballard and Ed Zipprich, while Triggiano was joined by Kathy Horgan, Hazim Yassin and Erik Yngstrom.

Before the vote, however, Ballard repeated his long-held position that the Senior Center, located on Shrewsbury  Avenue overlooking the Navesink River, should be exempted from the review of municipal properties. Instead, it should get immediate repairs to address damage and building code shortcomings that have kept it closed for two years, he said.

He also attempted, unsuccessfully, to amend Triggiano’s resolution to reflect those objectives.

“The community is in an uproar,” Ballard said, because the resolution’s title “clearly talks about recommended sale or transfer. That tells me it’s a sale or transfer. There’s nothing in here about repairing the Senior Center. Which is what the residents are asking for.

“Just do what the residents ask,” he said. “Five hundred, six hundred thousand dollars, fix the Senior Center… and move on to other borough facilities that we agree need to be addressed.”

Prior to Ballard’s remarks, Mayor Pasquale Menna, who only has a vote when the council deadlocks, urged the council for the first time to repair the facility. He noted that he was on the council when the center was built in the mid-1990s, and said he was “very proud of it.”

Now, “the calls have been incessant to me,” he said. “I think we have the capability to provide a degree of certainty to our seniors. They want to go back there. In my opinion, we should bond for it to be restored, and once we do that it’s the end of the discussion. They’re not moving anywhere, and the Redevelopment Agency comes up with a plan for the other facilities.”

Branch Avenue resident Stephen Hecht said the timing of Triggiano’s document “seems almost like a slap in the face” to residents asking elected officials to set deadlines for the Redevelopment Agency.

“I certainly want to hear what they have to offer,” Forest, of Locust Avenue, said of the Redevelopment Agency. “I don’t want the Senior Center, personally, to be part of some sort of municipal megaplex… but at this point I think we should probably let Redevelopment Agency finish its task.”

Corrado, of Linden Place, said a group he characterized as “the vast minority” of residents was “creating a frenzy” over the center.

Referring to a “fix-it-now” petition reported to have garnered 200 or more signatures, he said: “Well, there’s 12,000 people that live in Red Bank… You can be both for a Senior Center and letting the Redevelopment Agency do their job.”

Triggiano, who became council liaison to the Senior Center and a returning member of the Redevelopment Agency on January 1, said the resolution “was needed, regardless of the Senior Center issue before us,” to address what she called past “fumblings” by officials regarding borough facilities.

“What we are trying to express is that we are not in defense of selling or keeping any properties,” she said. “What this resolution is about is defense of a healthy process, which we have not had for decades.”

During the public comments, Maida, of Branch Avenue, derided Triggiano’s use of the word “healthy” in referring to government and processes, which she said had inspired a “drinking game.”

“Healthy government, healthy people, healthy this and healthy that,” she said. “I think there’s probably a lot of people in Red Bank now who are probably falling off their couches because you just take a shot every time a certain council person speaks to the ‘health’ of the discussion.

“Put up a resolution that allows us to fix the Senior Center and let’s just move on in the healthiest, healthiest way,” she said.

Former council member Cindy Burnham said Business Administrator Ziad Shehady had been “derelict in his duties, obviously, for two years” by not ensuring the Senior Center be repaired and reopened.

She suggested adding the property to the borough Recreational and Open Space Inventory, “unless you’ve already sold it off, and we don’t know.”

At one point, Cedar Street resident Sue Viscomi said Ballard and Zipprich were up against “the Z pack,” a reference to the four council members who have sided with Shehady in urging that the Redevelopment Agency be permitted to complete its work.

Angela Mirandi, of West Lake Drive, said Triggiano had mischaracterized Ballard’s and Zipprich’s position regarding the center over the past two years, making it appear they were acquiescing to inaction when instead they had called for it be repaired.

“I’m disgusted with you people,” she said.

“It’s not lost on me, the intent of that comment,” he said. “No matter what your opinion of us as people, as elected officials, I would ask that we refrain from using racist language.”

Viscomi told redbankgreen Thursday that she was “tongue-tied” on hearing Shehady’s crack about Mirandi, but flatly denied making the insult.

“I’m not a polished speaker,” she said via email, but “I have never made fun of anyone ever, no matter how heated the debate was.”

Several speakers urged a dialing-down of the heat.

“The tone needs to be taken down a bit,” said Alecia Wilkerson, of River Street.

“This vitriolic, divisive speech, we don’t need that,” said Corrado.