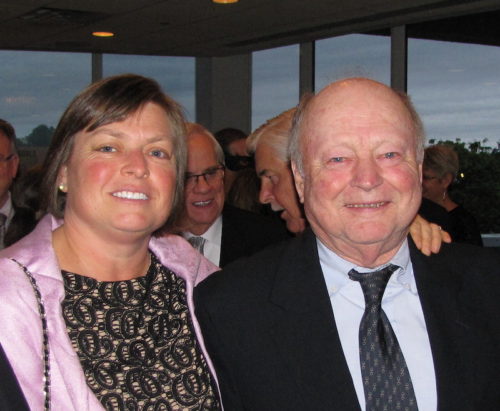 Samantha Bowers-Crader with her father, John Bowers, at the Mayor’s Ball in 2018. (Photo by John T. Ward. Click to enlarge)

Red Bank RiverCenter‘s new chairperson is filling a seat held three decades ago by her father.

The downtown promotion agency’s board of directors announced Samantha Bowers-Crader as its new leader Tuesday.

Bowers-Crader follows in the footsteps of her father, John Bowers, who chaired the organization for three years after its formation in 1991. Together, they run Philip J. Bowers & Company, a family-owned business that has extensive commercial property holdings along White and Water streets, as well as the Shrewsbury Manor apartments on Riverside Avenue.

Now based in Tinton Falls, the company’s been in operation since its founding in Newark in 1894. Bowers-Crader, who has a master’s degree in counseling psychology from Monmouth University, has headed the company’s commercial leasing and property management operations for 20 years.

In a prepared statement, Bowers-Crader said she is “very excited to work with this dedicated group of people focused on improving Red Bank.”

Bowers succeeds Cheese Cave owner Stephen Catania, who chaired the organization for three and a half years.

“It was just a situation where he got statuted out,” Councilman Hazim Yassin said of Catania at last week’s council meeting.

In the announcement, Catania was quoted saying that Bowers-Crader’s “in-depth knowledge of the commercial property business will be a valuable asset as Red Bank continues to emerge from the pandemic and we work toward filling some of the downtown vacancies.”

Created under New Jersey’s law governing special improvement districts, the quasi-autonomous agency is charged with keeping storefronts filled and boosting the district’s image as a destination for shopping, dining and entertainment.

RiverCenter operates on a budget of $564,970 funded by a surtax on commercial properties in the district, which extends from Broad Street to Bridge Avenue, mostly north of Monmouth Street. Property owners pay the surtax, which they may pass along to their retail and restaurant tenants.

The organization represents some 400 downtown landlords, merchants and restaurateurs in the district.

The change comes just weeks after the organization hired former borough planning director Glenn Carter as its executive director. He replaced Laura Kirkpatrick, who held the position for just 14 months.