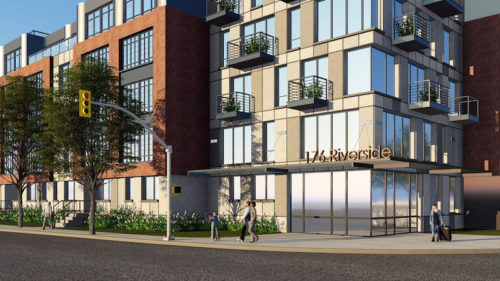 A rendering of Saxum’s planned project at Riverside Avenue and Bodman Place. (Click to enlarge)

Opponents of a potential tax deal for a massive proposed development in Red Bank may have to cool their heels until October to challenge the first step in the process.

The continuation of a planning board hearing to review a possible “area in need of redevelopment” designation for properties owned by Saxum Real Estate and others won’t resume until October 4.

The hearing began August 16, and was adjourned after two hours with residents waiting to be heard to September 22. But that session has now been postponed due to a conflict with the borough council’s schedule, board secretary Maria Graziano tells redbankgreen.

At issue is a possible zone reclassification for a cluster of properties near the Route 35 Cooper’s Bridge, including the former Visiting Nurse Association headquarters, at Riverside Avenue and Bodman Place. Two vacant gas stations are also included in the so-called “study area.”

Saxum, which now owns VNA site, obtained planning board approval in December, 2019 board to build 210 apartments there, including 32 units reserved for low- and moderate-income earners.

The planning board’s review is solely to determine “if the proper criteria have been met” to allow for a redesignation, not to weigh in on tax issues, board chairman Dan Mancuso said.

If approved by the council, a new designation would make Saxum’s 3.2-acre site, and others in the study area, eligible for tax relief in the form of a payment in lieu of taxes, or PILOT.

PILOTs generally call for tax exemptions for a specified period, up to 30 years, on site improvements. Instead, beneficiaries make specified “in lieu of” payments that, unlike standard levies, the town would not have to share with school districts.

(Contrary to assertions published elsewhere, Saxum does not have a five-year tax waiver under the current designation, borough officials tell redbankgreen. The firm pays about $50,000 per quarter in property taxes, and payments are current, according the borough tax office.)

No residents who got to the mic at the August 16 hearing spoke in favor of the change, and one board member made plain his opposition. Democratic council candidate Jacqueline Sturdivant has voiced opposition, as has current council member Michael Ballard. Saxum’s bid has also given rise to a blitz of lawn signs around town calling for rejection of a PILOT.

Meantime, the council plans to hold back-to-back workshop and regular meetings Wednesday night via Zoom starting at 6:30 p.m. Neither the zoning nor tax issue appear on the agenda for either session. Access and participation details can be found here.