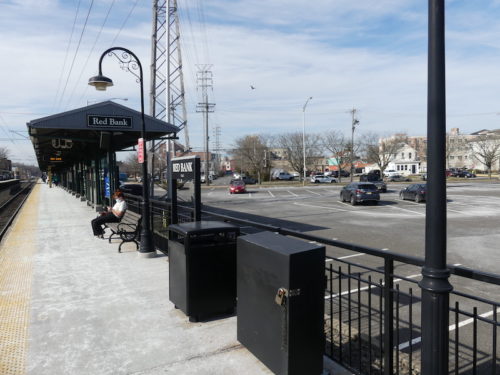 Denholtz Properties is negotiating to create a massive new development at the Red Bank train station, redbankgreen has learned.

The company’s plan is dependent on the borough designating a swath of sites around the station as redevelopment area, CEO Steve Denholtz said in an interview this week. 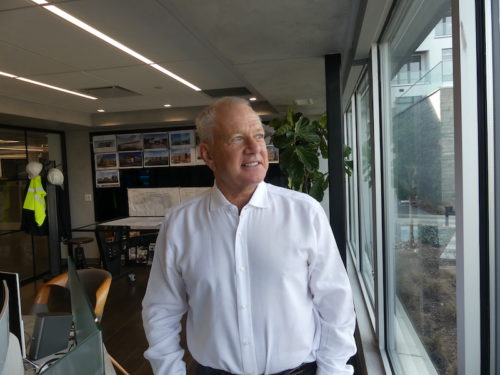 Steve Denholtz in his Chestnut Street office this week. Map below shows Denholtz’s current holdings and the NJ Transit sites it hopes to include in a development plan. (Google map by John T. Ward. Click to enlarge.)

Denholtz said his company, after “several years” of discussions, has an agreement in principle with NJ Transit regarding four parking lots east and south of the borough train station.

An expected “letter of intent” would give the firm exclusive negotiating rights, with the aim of entering into a longterm ground lease, he said.

That would allow Denholtz to develop the sites with apartments, commercial space and parking needed to serve commuters, residents and shoppers, Denholtz said.

Borough approvals would also be needed, and the company has reached out to elected officials in town and the now-dormant Redevelopment Agency to lay the groundwork for an Area in Need of Redevelopment study and eventual rezoning, Denholtz said.

“There’s no way under existing zoning that we could develop it,” he said.

He declined to say if tax relief, a potentially controversial aspect of the designation, would be sought.

“Look, I know that’s a hot topic,” he said. “We’ll address that much later. It’s certainly not a conversation to be had now… We’re not there yet.”

Mayor Pasquale Menna did not respond to a redbankgreen inquiry about the possibility of action on a study to kickstart the effort. But interim Business Administrator Darren McConnell told redbankgreen that, while he doesn’t set the agenda, “I would  expect it to be considered at one of the next two council meetings,” scheduled for Wednesday and April 13.

NJ Transit officials declined comment. The agency “continuously explores opportunities for Transit Oriented Development (TOD) at our real estate assets throughout the system, including those stemming from unsolicited proposals for development,” spokeswoman Nancy Snyder told redbankgreen via email. “At this time, it is premature to speculate or comment on any potential future procurement processes.”

The Denholtz project, with the working name “The Center,” would include a smattering of parcels between Monmouth and Herbert Street. They include:

• The Mayo Auto Service site on Monmouth Street and three adjoining lots extending to West and Oakland streets. As previously reported by redbankgreen, Pete Soviero, who recently sold the property to Denholtz, plans to continue using it for his auto repair business under a lease-back for the next two or three years.

• The NJ Transit parking lot alongside the east side of the station to West Street.

• A 95-space lot on Herbert Street that Denholtz has owned for five years.

Denholtz declined to offer details of what’s planned, and said concept drawings are not yet available.

But the project would have “a senior housing component, with a priority for veterans,” he said, and some retail space would be reserved for “craftspeople so they can affordably show and sell their products.”

The development would displace no homeowners, residential tenants or businesses, and involve “no gentrification,” Denholtz said. It also would “maintain the bus routes” that flow through the site, he said.

Next door to its headquarters, Denholtz is nearing completion on the Rail, a 57-unit apartment building with an interior parking garage extending from Chestnut to Oakland Street along the southbound North Jersey Coast Line tracks.

Denholtz said he imagines the future development as “somewhat taller” than the four-story Rail, though he declined to say how much taller.

“It’s going to be something that’s agreeable,” he said. “We’re not looking to stick a spaceship here.”

Under legislation signed by Governor Phil Murphy in 2018, NJ Transit created the position of “chief of real estate” to “increase non-farebox revenue” and monetize “underutilized” assets, according to an agency announcement a year later.

Parking capacity at Red Bank station is 479 spaces, with current utilization of 30-to-35 percent, Snyder said.

“They don’t want as much parking as they have, because their lots sit empty,” Denholtz said of the agency. “All up and down the line to New York, they’re not getting the ridership they used to get, because there’s so many centers of commerce” in towns along the way, he said.

“This is what Red Bank needs,” he said. “There’s no way Broad Street isn’t going to be in flux if the downtown doesn’t have more residents, and the east side is not where you can build more residences.

“This is where it should be. This is vacant. It’s an ideal situation,” he said.

The vision for the train station emerged after the company, which long specialized in office and other commercial space, relocated from Matawan in 2017, said Denholtz, an Oceanport resident.

“Once you’re here and you feel the vibrancy of what can happen in Red Bank, the opportunity makes sense,” he said. “And we have control of the pieces that surround it.”

The company is also building a 10-unit luxury condo complex downtown, and has acquired a number of key properties in the business district.