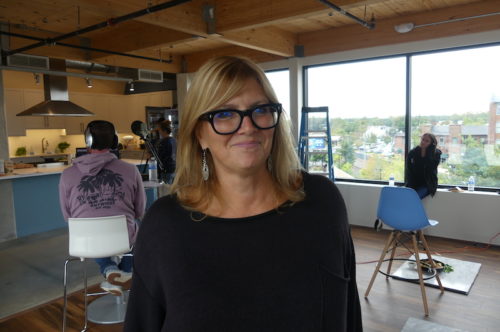 Sawtooth Group owner Kristi Bridges in the firm’s new kitchen. Below, a view of the building’s fourth-floor balcony on the Shrewsbury Avenue side. (Photos by John T. Ward. Click to enlarge)

On Monday, Sawtooth Group became the first of several expected tenants to move in at 200 Monmouth Street, better known as the former Anderson Storage building.

By Tuesday, the firm’s fourth-floor kitchen was aswarm with employees creating content for a client, Explore Cuisine.

In 2012, the firm had moved from Woodbridge to the newly built Red Bank Corporate Plaza, at West Front and Pearl streets, but a subsequent narrowing of focus to the food and fitness sectors meant it “had to have a kitchen,” said Sawtooth owner Kristi Bridges.

Unable to build one in its third-floor space at that address, the 25-person firm was making do with local residential kitchens.

“We had a lot of trouble finding a place to shoot” commercials and video recipes, said Bridges.

Sawtooth’s lease covers the entire 7,000-square-foot fourth floor of the new portion of the building, and includes a gym for employees.

While awaiting completion of its new space by developer Metrovation, Sawtooth operated for the last two years from space at 25 Bridge Avenue, across the street from the Anderson building.

Though a Metrovation spokeswoman said the firm still has an expected six months of work to complete, Sawtooth’s move-in at 200 Monmouth clearly marks a milestone in the transformation of the red brick fortress, known to many for its large exterior clock facing the train station.

The building, at the corner of Monmouth Street and Bridge Avenue, had been vacant for 30 years or so, Metrovation lawyer Rick Brodsky told the planning board in 2014.

Still to come is the highly anticipated opening of Sickles Market Provisions, the first expansion of the 111-year-old Sickles Market beyond its Little Silver location.

According to a report by the triCity News, the food market will open January 10. In the interim, Bottles by Sickles, its liquor shop, will open November 2, triCity reported.

Metrovation principal Chris Cole was not available for comment earlier this week.

The firm won borough approval in 2006 to convert the 27,000-square-foot Anderson building into 23 condos and two street-level stores. But it abandoned that plan in 2012, citing poor economic conditions.

Four years later, it got a green light for a four-story addition and other changes to nearly double the size of the structure, with retail space on the ground floor and offices above. The changes were designed by Richardson Smith Architects in Princeton.

In the interim, the immediate area has burgeoned with development, including the completion of the Station Place and Oakland Square apartments on Monmouth and Oakland streets; Metrovation’s own West Side Lofts, a 91-unit apartment building at Bridge Avenue and West Front Street; and Triumph Brewing Company, next door to that.

Now under construction just a block away is Denholtz Properties’ Rail development, which will bring 57 new apartments and retail space, to a site that abuts the train station. And at 170 Monmouth Street, builder David Popkin is converting the five-story office building into residences.