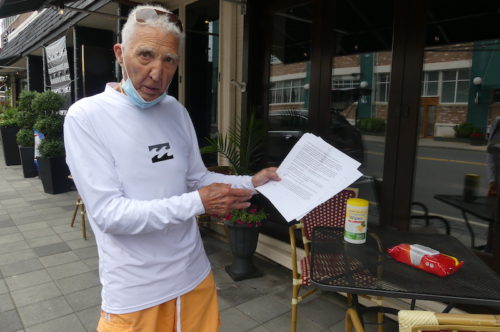 Danny Murphy, owner of Danny’s Steakhouse, with the safety guide he prepared for his employees. (Photo by John T. Ward. Click to enlarge.)

Their industry battered over the past three months by the COVID-19 pandemic, Red Bank’s restaurateurs are now scrambling for a toehold on recovery.

With partial reopenings slated to begin Monday, they’re training staff in a host of new hygiene procedures. At the same time, some are also racing to shift operations into two new shopping and dining plazas being created downtown. 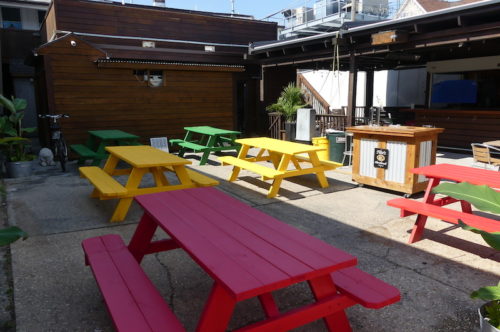 Jamian’s Food and Drink, above, has set up colorful picnic tables in an area previously used for parking on Gold Street. Red Tank Brewing, below, plans to put out planters as well as tables on Monmouth Street. (Click to enlarge.) 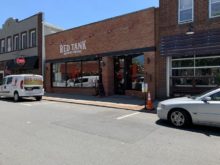 As of Monday, restaurants throughout New Jersey can resume “in-person” sit-down dining, providing it happens outdoors and meets a number of health and safety requirements, under an executive order signed by Governor Phil Murphy earlier this month.

Monmouth Street between Broad and Maple Avenue would be closed all day Sunday for the same purpose.

The borough’s “Temporary Outdoor Business Extension” program, developed under the lead of an ad hoc committee appointed by Mayor Pasquale Menna last month, is expected to transform the look and feel of the downtown, with the aim luring customers back after an historic economic lockdown.

“I’m excited, and kind of expecting to be surprised myself” by the scene that develops, said John Arcara, owner of Red Tank Brewing on Monmouth Street. “I’m hoping it’s like a European-style open plaza.”

Arcara said he doesn’t know why Monmouth Street will only be shut down Sundays while Broad Street gets the three busiest nights of the week, “but at this point, beggars can’t be choosers. We haven’t been making any money for months.”

Arcara said he’s planning to put out tables in the street, as well as flower pots to beautify the immediate area. He’s also talking to nearby restaurateurs about the possibility of bringing in live music, he said.

During the plaza operating hours, customers can expect to see many of the sidewalk cafés that have operated in the past. But at least a handful of those restaurants will also have secondary outdoor seating areas in the roadway out front – provided they have a permit from the borough and comply with a list of regulations.

Among them: they must maintain a five-foot sidewalk clearance, as in the past; can’t place tables and chairs within three feet of a curb; and can’t impinge on an 18-foot-wide pedestrian walkway down the center of the street.

Restaurants must file seating plans along with an explanation of “how the proposed plan conforms to all safety and precautionary measures relating to social distancing and COVID-19 related issues,” according to borough guidelines.

“Our goal is not to be sticklers, but to be as lenient and forgiving as we possibly can,” said Councilman Hazim Yassin, the council’s liaison to RiverCenter.

Additionally, under New Jersey Alcoholic Beverage Control rules, bars and restaurants licensed to serve alcohol may do so in their street dining areas, which must be set off by “barriers.” Those can be as simple as stanchions and a plastic chain, Kirkpatrick said.

Arcara said he understood his ABC application, which he filed this week, would be forwarded to the borough for quick approval. “It’s been really easy and great,” he said Friday.

Though the pedestrian walkway in the street is wide enough for only three people to stand abreast at a time under social distancing recommendations, Kirkpatrick said visitors “are going to figure out” how to safely pass one another on sidewalks and mid-street.

As for booze, “licensed establishments must have their area secured and open containers cannot leave that area at all,” McConnell said.

Retailers, who can place merchandise in front of their stores, won’t be required to delineate their zones with barriers.

McConnell, who had been planning to forego the customary hiring of summer part-time police officers known as “specials” because of the COVID-19 lockdown, last week asked the council to approve two to patrol the plazas so coverage of the rest of town is unaffected.

There’s no end date to the council resolution allowing the plazas. “It’ll depend on how it goes,” said Kirkpatrick. “First, we’ve got to get these businesses back to 100-percent indoor capacity.”

Meantime, Monday’s restart of outdoor dining is seen as something of a ramping-up to the plaza project, said Kirkpatrick.

Monmouth Street bar and restaurant Jamian’s Food and Drink, which has converted its rear parking spaces to a dining area, was fully booked for 1.5-hour seatings from 5 to 8 p.m. Monday, owner Jamian Laviola posted on Facebook.

Hungry visitors can also expect to find picnic tables in parking lots at Teak on Monmouth Street; a large outdoor table at Birravino on Riverside Avenue; and tables on Broad for Neapoli, which is located about 100 feet east, on Wallace Street.

At Danny’s Steakhouse on Bridge Avenue, diners will find hand sanitizing wipes in packets next to the salt and pepper.

Because his restaurant isn’t on Broad or Monmouth, Danny Murphy, who’s owned and operated the eatery for 50 years, can’t expand into the street. But he’s transformed an area on the south side of his restaurant from a smoking pad to a two-table area seating a total of eight customers, to help make up for the loss of sidewalk café seating under six-foot spacing requirements.

He’s also written detailed instructions for his staff regarding protective equipment (masks and gloves at all times), disinfecting of tables (rigorous) and more.

“Menus get used once and thrown away,” Murphy said Thursday. “We’ll be constantly sanitizing.”

There’s a protocol for customers, too: make a reservation, call when you arrive. Have a drink while waiting, but not in your car, unless you want to risk a DWI arrest.

Murphy acknowledged that it all points to a situation ripe for someone with an itch to complain on social media. If one customer positions his chair within six feet of another, for example, he could end up with “five pages” of arguments on his Facebook page.

But his biggest concern is existential, Murphy said. Under the prohibition on indoor dining, Murphy’s restaurant is down to 38 seats, from the usual 150, and can’t come close to breaking even at that rate.

“We’re doing everything we can” to comply, he said, “but I’ve just seen my industry getting crushed, and I don’t know if it will survive. I only know that I will never see two-deep at my bar again.”