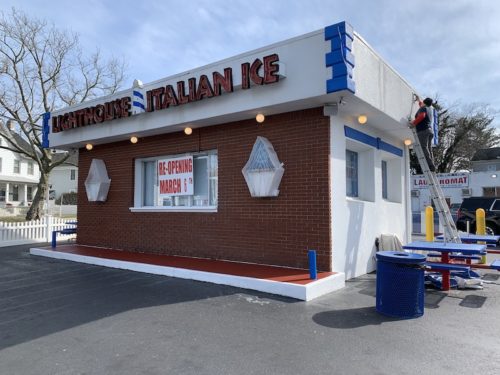 The surest sign of spring’s approach on the Greater Green may be the annual reopening of Strollo’s Lighthouse Italian Ice in Red Bank. And that’s scheduled to happen at noon Friday.

Meantime, the winter of 2020 continues to serve up unseasonably warm days, according to the National Weather Service. Check out the extended forecast below. (Photo by Trish Russoniello. Click to enlarge.)

END_OF_DOCUMENT_TOKEN_TO_BE_REPLACED A sure sign that spring is nigh: Strollo’s Lighthouse in Red Bank opened Friday for another season of serving Italian ice and other frozen treats. A good time to get in line might be 5:58 p.m. Wednesday, the official start of spring.

Meantime, the Greater Red Bank Green is in for some mild weather, according to the National Weather Service.  Check out the extended forecast below. (Photo by Trish Russoniello.  Click to enlarge.) END_OF_DOCUMENT_TOKEN_TO_BE_REPLACED The Lighthouse “iceshake.” (Photos by Sherri Hall. Click to enlarge.)

In search of the Greater Red Bank Green’s best cold and frozen treats to help you beat the heat this summer of ’16, PieHole‘s Cool Inside series returns for a third installment  with a with a stop for a chilly treat you can sip through a straw.

END_OF_DOCUMENT_TOKEN_TO_BE_REPLACED

RED BANK: COOLING OFF AT THE LIGHTHOUSE Twilight at Strollo’s Lighthouse finds pint-sized customers getting their chill on. (Photo by Susan Ericson. Click to enlarge)

Winding down the summer, PieHole seeks out a cooling oasis at the end of an oppressively hot and humid day and finds sweet reward at Strollo’s Lighthouse in Red Bank.

Wedged, literally, at the junction of Rector Place, Bridge Avenue and Riverside Avenue, the ice cream shop is a beacon to behold at the foot of Cooper’s Bridge.
END_OF_DOCUMENT_TOKEN_TO_BE_REPLACED When Kevin Valerio announced the annual re-opening of his Strollo’s Lighthouse Italian Ice business in Red Bank last week, daytime temperatures were peaking around 70 degrees. So he didn’t expect the stand, at Rector Place and North Bridge Avenue, to be encrusted in American ice and snow that he and his employees would have to hack away at with less than 24 hours to go.

END_OF_DOCUMENT_TOKEN_TO_BE_REPLACED END_OF_DOCUMENT_TOKEN_TO_BE_REPLACED

COOL INSIDE: WARM AND COLD AT RALPH’S A warmed-over cookie is the centerpiece of this treat from Ralph’s. (Photos by Sherri Hall. Click to enlarge.)

Warm meets cold in this week’s installment of PieHole‘s Cool Inside summer series in the form of a sweet treat from a walk-up window in Lincroft.

END_OF_DOCUMENT_TOKEN_TO_BE_REPLACED

ON THE GREEN: SPRING ON THE HORIZON? A sprucing-up at the seasonally open Strollo’s Lighthouse Italian ice stand in Red Bank in Tuesday’s t-shirt weather would seem to signal the approach of winter’s end. Of course, it’s never over until it’s over. But Wednesday’s forecast of sunny skies and temperatures in the low 70s promises a taste of spring.  (Photo by Trish Russoniello. Click to enlarge) END_OF_DOCUMENT_TOKEN_TO_BE_REPLACED

A CHILLING TALE? NO, BUT IT’S REFRESHING Things get downright icy this week when Cool Inside, a redbankgreen summer series featuring chilled and frozen delectable edibles,  scales the three peaks of a simple yet satisfying treat from right here in Red Bank.

END_OF_DOCUMENT_TOKEN_TO_BE_REPLACED For kids, it’s the best time of the school year: the end. And right about now, they can taste it.

Literally so, for some students at the Red Bank Charter School. Yesterday, they invaded the grassy field of Riverside Gardens Park for their annual field day, which includes a free-for-all for kids to blast tone another and their teachers with  water balloons.

Red Bank Middle School students, meanwhile, still have another few days until they can hit the beach with any regularity. But the school’s 6th graders spent Thursday priming for the dog days with their counterparts from Monmouth Beach.

END_OF_DOCUMENT_TOKEN_TO_BE_REPLACED A taxicab ended up on the sign island in front of Strollo’s Lighthouse at North Bridge and Shrewsbury avenues in Red Bank Wednesday evening after a two-vehicle accident. Details about the crash and the extent of injuries, if any, were not immediately available from police. (Photo courtesy of Bill Day)

The first weekend of spring 2009 turned out to be a good one for drawing pictures on your friend's jeans, getting the first Italian ice of the season at Strollo's Lighthouse or hauling away on foot what appears to have been the accoutrements of a birthday party, including balloons, a pizza and a bagful of who-knows-what.

END_OF_DOCUMENT_TOKEN_TO_BE_REPLACED

You’d have thought it was a sweltering week in the dead of summer instead of the crisp, Thanksgiving-tinged days of autumn.

Last week’s Where, showing a blue and white striped fence, attracted 23 responses, which may be a record for this feature (we really ought to start keeping track of such critical data). And what brought most of them out was, of all things, Italian ice served by a business that’s closed for the season.

Which is to say the great majority of those who wrote in recognized the fence as the one behind Strollo’s Lighthouse, the landmark Italian ice joint at junction of Route 35, Rector Place and Bridge Avenue in Red Bank.

END_OF_DOCUMENT_TOKEN_TO_BE_REPLACED

See, kids? This is where having a particular expertise comes in handy.

Retromedia Sound Studios owner John Noll used his specialized knowledge in sound technology to identify last week’s ‘Where‘ as a picture of a loudspeaker atop 1 Broad Street, home of Heritage Liquors (at the corner of East Front Street).

Either way, thanks and congrats to John.

Can you identify this week’s image? Email your guesses to us, please. (And is it just us, or does staring at this photo make you crave an orange Italian ice from Strollo’s? No, that’s not a hint.)